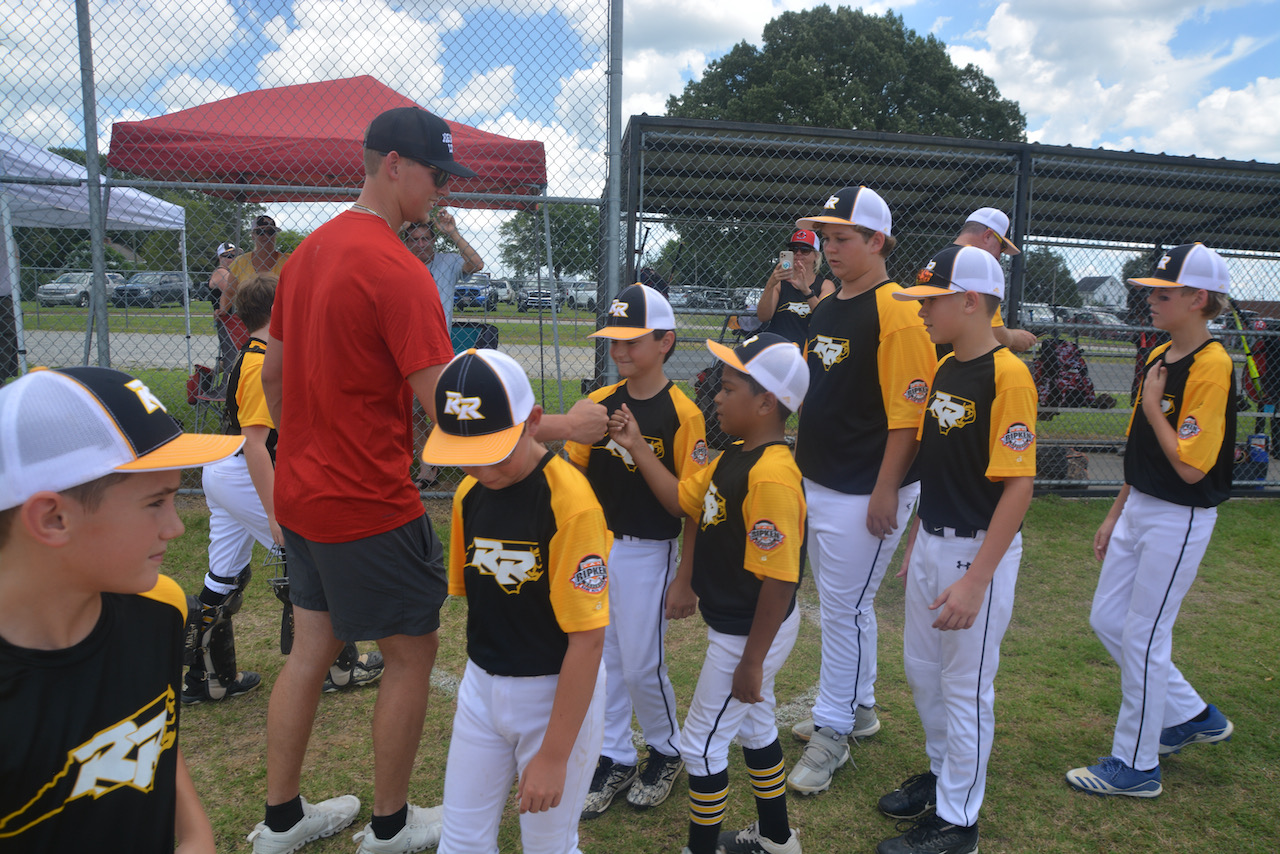 This afternoon at Ledgerwood Field, Reid Johnston was taken back to a time before he stepped on the mound at North Carolina State University as he was invited to throw out the first pitch for the Cal Ripken 9- and 11-year-old state tournament.

“I’d like to thank Scott and Caleb for having me,” Johnston, an Enfield native and junior pitcher for the Wolfpack, said of Scott Hall, chief deputy of the Halifax County Sheriff’s Office, and his son Caleb. “I couldn’t think of a better time to come home and come to my home county and watch the little kids play baseball and throw out the first pitch.”

Said Johnston: “I’ve gotten so much support from Halifax County, Enfield and Roanoke Rapids to come out here and show my thanks to these guys. It’s awesome.”

Johnston, the son of Katherine and Todd Johnston, pitched six innings in the first game of the College World Series, helping the Wolfpack secure a win against Stanford.

Then on Saturday, ESPN reported, the NCAA Division I baseball committee declared Saturday's winner-take-all bracket final between State and Vanderbilt a no contest due to COVID-19 protocols, putting the Commodores into the CWS championship round.

“I can’t really comment on the details but obviously, just speaking for myself and my teammates, my coaches, we were just disappointed,” Johnston said after delivering the first pitch. “We went there to play for a national championship, we were in the position to and then we just had an unfortunate turn of events and now I’m at home not playing for a national championship.”

Johnston had always hoped for a chance to play in the CWS. “That’s one of the reasons I chose to go to N.C. State because they have a good baseball program. They compete every year for a chance to go to the world series. I knew if I went there with the guys we have we were going to have a chance to go. It’s always been a dream of mine but to see it actually happen is an awesome feeling.”

Despite the setback, Johnston still describes the experience as unreal. “I was just trying to soak everything in. I know a couple of people who played in the world series. Leading up to when we left, all they could tell me was it’s going to be the best experience of your life, the city of Omaha, just so many baseball fans there even if they’re not affiliated with the team.”

He said, “I was just trying to soak in every minute of it that I could when I wasn’t playing and obviously when I was playing just going out there and doing my job. It was just an unreal experience. It was a once in a lifetime experience.”

Even playing college ball now and chance of playing ball on a larger leveI, Johnston said, “I think about the days I played Little League ball every time I step on the field. I’ve played thousands of baseball games but some of the greatest times I’ve had playing baseball were in Little League. You get to have a lot of fun out here. I was in their same shoes about 10 years ago and I kind of reflect on it and where I began my baseball career.”

What the future holds is something he can’t immediately answer. “I have a year left so there’s a chance I can come back next year. I’ve just got to see what happens in the draft in two weeks and make my decision after that.”

Whatever the future, Johnston believes next year’s edition of the Pack will be good and a possible contender. “Every year I’ve been there we’ve been in the top 10, top 15. I don’t expect that to ever change. We do a great job recruiting, bringing in good players and developing players so whether I’m there or not I think they’re going to have a great season next year and will be in contention to go back to Omaha.”

Much of the success of the Wolfpack baseball is tied to veteran coach Elliott Avent, Johnston said. “He’s been there so long he’s seen it all. He’s coached every type of player. He knows how to get you ready for any moment. With his experience everybody trusts him.”

Of Avent, Johnston said, “He’s seen it all so having somebody like him to coach us and lead us is the reason why we’re successful.”

As far as his parents, Johnston said, “They’ve supported me as much as I could ask for. I don’t think they missed but five games I’ve played in. If it weren’t for them I wouldn’t be where I am right now.”