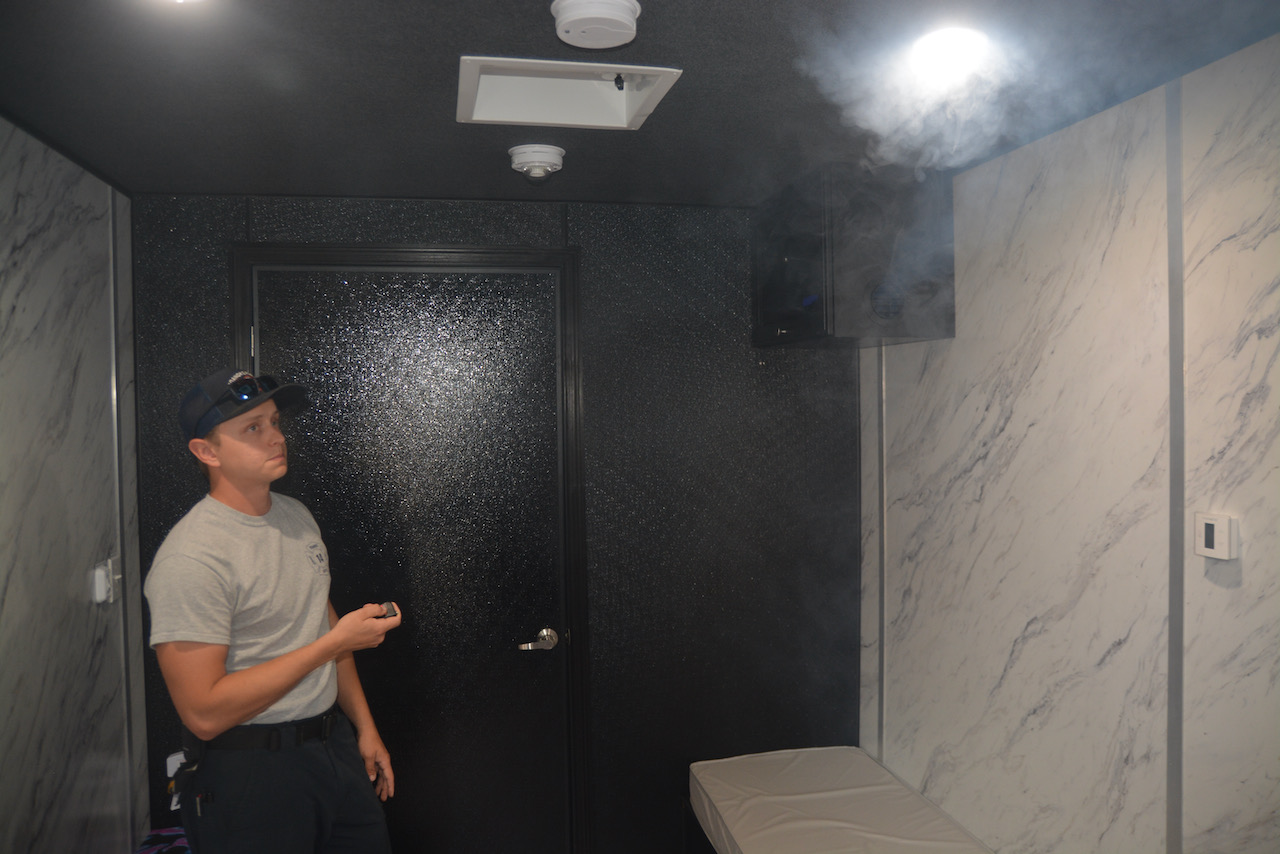 The pot begins smoking, the inside of the oven catches fire, and the door gets warm signaling there is fire on the other side.

Fortunately, there are two escape routes inside the small bedroom — a door and a window with a ladder.

In years past Roanoke Rapids firefighters could only tell visitors to the old fire safety house a door warms when there is fire on the other side and if you don’t get low enough you can feel the  heat.

With the new fire house safety house, which has been wrapped to look like a small brick home and carries safety reminders, visitors will get to experience the sights and sounds of simulated fire.

“It has a whole lot more features,” said Deputy Chief Wes Hux, who with Chief Jason Patrick and emergency services instructor Kevin Kupietz put together the FEMA grant application in 2019.

Hux said the new house provides interactive learning. It comes with remotes that are used for fire safety quizzes. “It has a ramp to get someone in a wheelchair or crutches inside.”

Unlike the old safety house, often called the smokehouse, the new house comes with its own generator to provide power.

Hux said the accessibility of entering and exiting the new safety house opens up the department’s education programs to more people than just school children. “Part of getting this was to target older citizens and those in senior living centers.”

Patrick said the former safety house which was used for some 25 to 30 years and was donated by the former Carolina Telephone & Telegraph served the department well over the years but its cramped space wasn’t conducive to older people. “One of our goals was opening this up to the older population.”

The new house is climate controlled and has an awning which can be used to protect visitors from the elements.

The department’s Fire and Life Safety Educator Michael Butts said the difference between the old and new is a matter of feel. “We’re able to incorporate more senses. They will feel the heat. We are getting more realistic situations.”

Firefighter Hunter Whitmire was one of the many students who went through the old safety house as a child. “Going up the stairs you had to go up on your hands and knees.”

Now he will be one of the firefighters demonstrating the new house and in the bedroom he demonstrated how the door will get warm to indicate a fire is on the other side and will show the visitors the proper escape routes.

He also points out the carbon monoxide detector and the hearing impaired smoke alarm inside the new house. “It’s eye-catching for the children. They can see it work.”

As part of the grant the department also got a Bullex fire simulator for extinguisher training, Patrick said, which means the training can now be held inside offices.

For Butts, the new house expands the educational outreach of the fire department. “I’m excited. I’m ready to get it rolling.”