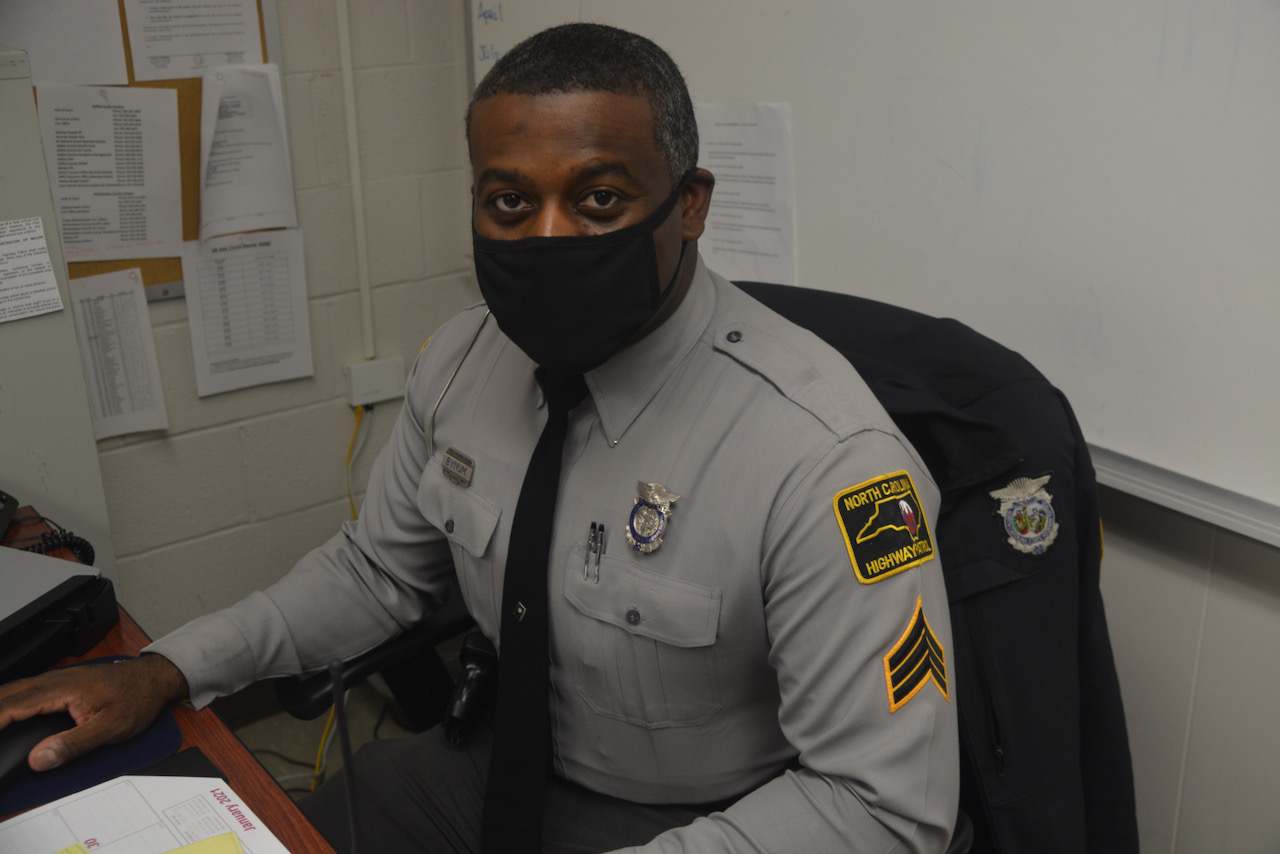 For Bynum, master plan comes together for sergeant stripesFeatured

When he was promoted to master trooper in 2015, Levern Bynum Jr. had a master plan.

Last month he saw the plan come to fruition when he was promoted to line sergeant.

Unlike many troopers who pass the sergeant’s test and are sent elsewhere to begin their duties, the Weldon native was allowed to come back to the Roanoke Rapids office off Highway 125.

It was First Sergeant D.S. Smith who encouraged the North Carolina State Highway Patrol leadership to have Bynum come back to Roanoke Rapids.

“He’s dedicated,” Smith said Wednesday. “He’s from the old school. He’s a hard worker. He’s focused. He’s a great big sponge trying to soak up everything. I knew he would be an asset. It’s truly an asset to have him here.”

The drive to become a sergeant meant study — many hours of study and he teamed up with a fellow trooper out of the Nash-Edgecombe district — Justin Roy.

Roy also earned his sergeant’s stripes and finished number one out of the top 50 troopers of the 500 who took the test.

Together they soaked up all the information, often meeting at the weigh station at the Halifax-Nash line to prepare for the rigorous test.

He studied the state’s motor vehicle laws in the effort to pass a test where the answers to the multiple choice questions are not as absolute as other tests might be.

Then there was the assessment interview which was done by a neutral group IO Solutions based out of Chicago in which candidates are given two minutes to explain what they would do in a certain situation. “It makes you react quickly like the real situation. That’s pressure,” Bynum said.

For all the hard work, countless hours of preparation and study, Bynum finished in the top five of the 50 troopers taking the test. “I would say my preparation and study allowed me to excel. When I completed it, I didn’t feel I did extremely well. When I got the test results back I did decently.”

In the gallery: Bynum at his desk with his sergeant stripes and the 2015 photo of him and his wife

For Bynum, who grew up in the Spruce Court housing project in Weldon, there’s deeper meaning to preparing and studying for the test and that’s simply to teach his 15-year-old son and others from the community, “What you put into life is what you get out of it. It doesn’t matter your background. You keep your eyes on the prize. It just gives people a glimpse of hope and ensures hope.”

And there were mentors in his life who encouraged him along the way.

James Lynch, who teaches at Halifax Community College and was his high school football coach at Weldon demonstrated to him education is the key.

When Lynch learned Bynum had passed the test he was ecstatic. “He had seen the work I put in to better myself.”

Phyllis Neville was Bynum’s school mom. “She and Mr. Lynch ensured that I was able to attend functions that cost money. She made my prom tux and took care of me while I was in college.”

When Bynum was at Winston-Salem State and was stuck without a ride home to Weldon, “Mrs. Neville in short notice came to my rescue and picked me up because the dorm rooms had already closed for the holidays. Seeing those two and the way they interacted with myself and other students from a low-income area is why I gravitated towards trying to help others in the community here.”

His family — his wife Ebony, his son Levern III and 7-year-old daughter Makayla — were behind him in working toward his master plan.

He said his son “could see what I was telling him came to fruition. He’s seen the time and effort put into it.”

His son, a student at KIPP who wants to be a pharmacist, said, “It’s his character and determination. He wanted to be a sergeant so bad. I’m just so proud of him. It just told me I could do the same thing.”

His wife eased up on his “honey do list to give me an avenue to prepare. She would also quiz me on policies and procedures.”

He credits Smith for being his advocate to stay at the Roanoke Rapids office. “He knew I would be a good fit. With an advocate like that you try to work harder so you can be amongst the best of the sergeants in the district.”

Bynum’s new job as sergeant means he has to ensure the goals of the highway patrol are met along with its mission.

The Roanoke Rapids office has a good nucleus of troopers, Bynum said. “They’re some of the brightest troopers I’ve met. It is truly a pleasure to come into a district like Troop C District 8 in Halifax and Northampton counties. Being a trooper here I have firsthand knowledge of the challenges that face the district. In my new position it allows me to meet the challenges head-on and ensures that the district’s morale stays high by talking to the guys and getting their opinions on what I can do better to help them.”

He has the troopers bring photos of their families in so he can place them by the pictures of his own family “because we are all family members as well.”

Knowing the area and knowing the troopers makes the learning curve less stressful, he said. “I know who’s who. It helped me to get a headstart.”

One of the messages he keeps in his phone is from a person he arrested in the past for DWI. The message is positive and those he has arrested know he is “hard but fair. I’m going to be cordial and polite.”

Most of the people he stops realize it was their own actions and not the troopers who put them in their predicament. “We do the job to ensure safety. It’s like a parent with a child. We issue citations based on driving patterns that are potentially dangerous to the motoring public. We feel that it’s better to give a citation than to deliver bad news. You build a rapport. That makes for positive relationships.”

He is also glad to be in Halifax County where he can work with law enforcement he already knows. “I’m excited to work with some of the best officers and chiefs in the area. From the high sheriffs to deputies and from the chiefs of police to the officers it’s a pleasure to work with them. This is great to be somewhere where customer service is paramount.”