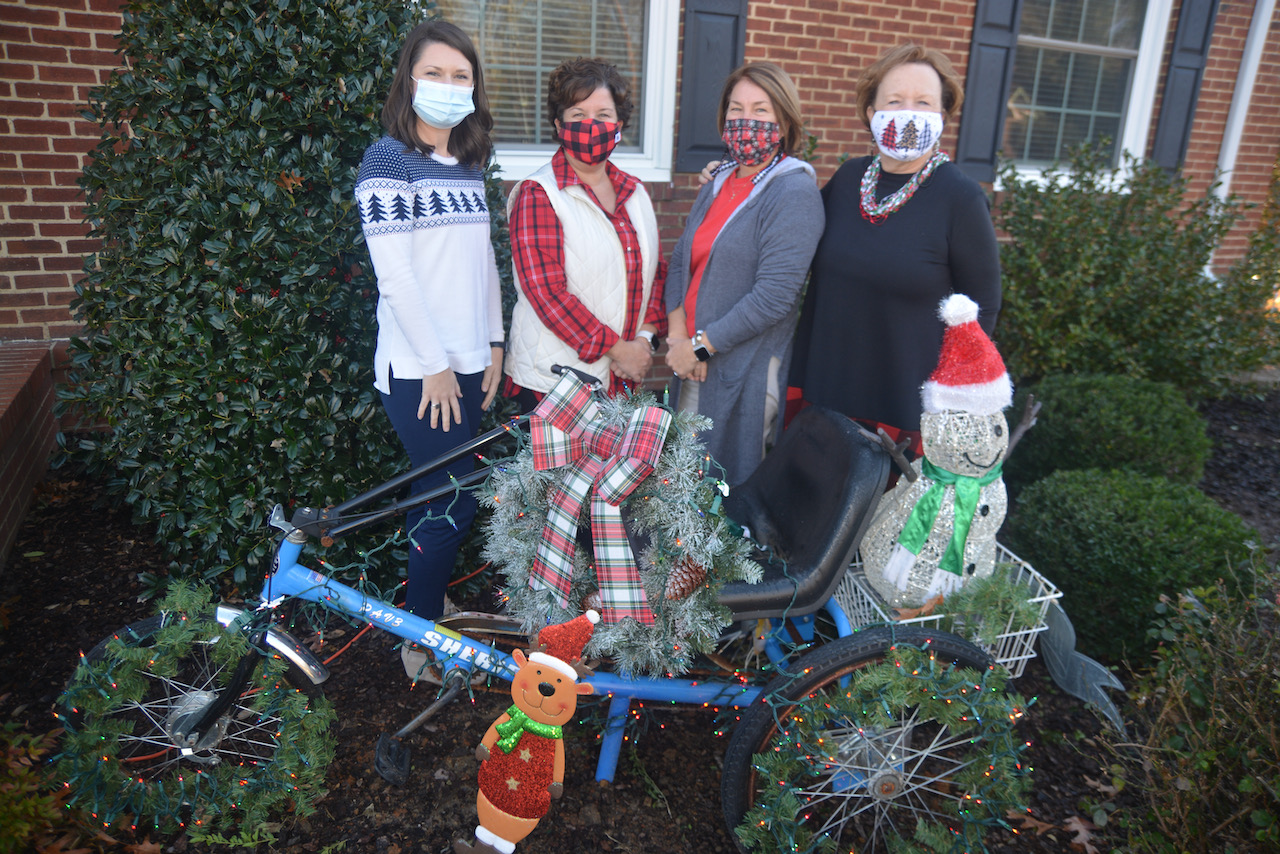 “This community was Mike’s family,” Superintendent Dain Butler, whose idea it was to honor Stainback, said. “We certainly miss his daily visits complete with his sayings, smiles, and laughter. Hopefully when people see his bicycle in front of the central services office, they will be reminded of the happiness he brought us all and spread that to others.”

Stainback, affectionately known throughout the community as ZZ, died in September of 2019 from injuries sustained in a March of 2019 collision with a vehicle as he pedaled about the city on his daily rounds.

Jean Thompson, the clerk to the board of education, said Tuesday she contacted a cousin of Stainback’s — Lynn Conner — to ask what the family was going to do with the bike he was riding at the time of the crash. “I told her we would like to have it and she agreed.”

The school system’s maintenance department welded it to a pole in front of the central office and it is now adorned with Christmas decorations.

Stainback had been to the central office the day of the crash for a retirement program.

Steak and baked potatoes, which was also one of his catchphrases, was served that day, Thompson said. “Mike ate lunch and left here.”

At Ninth Street and Roanoke Avenue he was struck by a vehicle, fell off the three-wheeler bike and struck his head. He was left in critical condition.

“I was hoping he was going to be OK,” Thompson said.

While he would eventually succumb to the injuries, he left an impression on the central office staff through his visits, his jokes and even through his phone messages.

A voice message left to Thompson of Stainback singing a medley of Christmas carols when Dennis Sawyer was still superintendent:

The bike display, Thompson said, “Is a tribute to him. We loved when he came by the Roanoke Rapids Graded School District. Everybody’s got stories about Mike.”

“He was part of the central office staff,” Thompson said. “He was athletic director at the high school and he became (former football) coach (Eric McDaniels) assistant by handing him his headset and would help with things in the summer. He was the biggest Yellow Jacket ever. He knew how to coach the boys in football and would tell us what the coaches needed to do.”

Even now, more than a year since his death, there’s always something that triggers a conversation about him, Thompson said.

And while he was known for cracking jokes and having fun, Thompson said there was a serious side to the man. “He used to tell me he was worried he wouldn’t see his mamma and daddy again. I told him he would see them in heaven. He finally got it. It was the innocence about him I loved the most.”

His visits to the school system go back at least to when Mike Williams was superintendent in the late 80s and early 90s. “We loved him. He was part of us,” Thompson said.

“I think he would be so proud,” Midgette said of the bike being in a prominent location in his honor.

His visits, she said, “They were just a bright spot in our day. I would get jealous if he didn’t come to see me.”