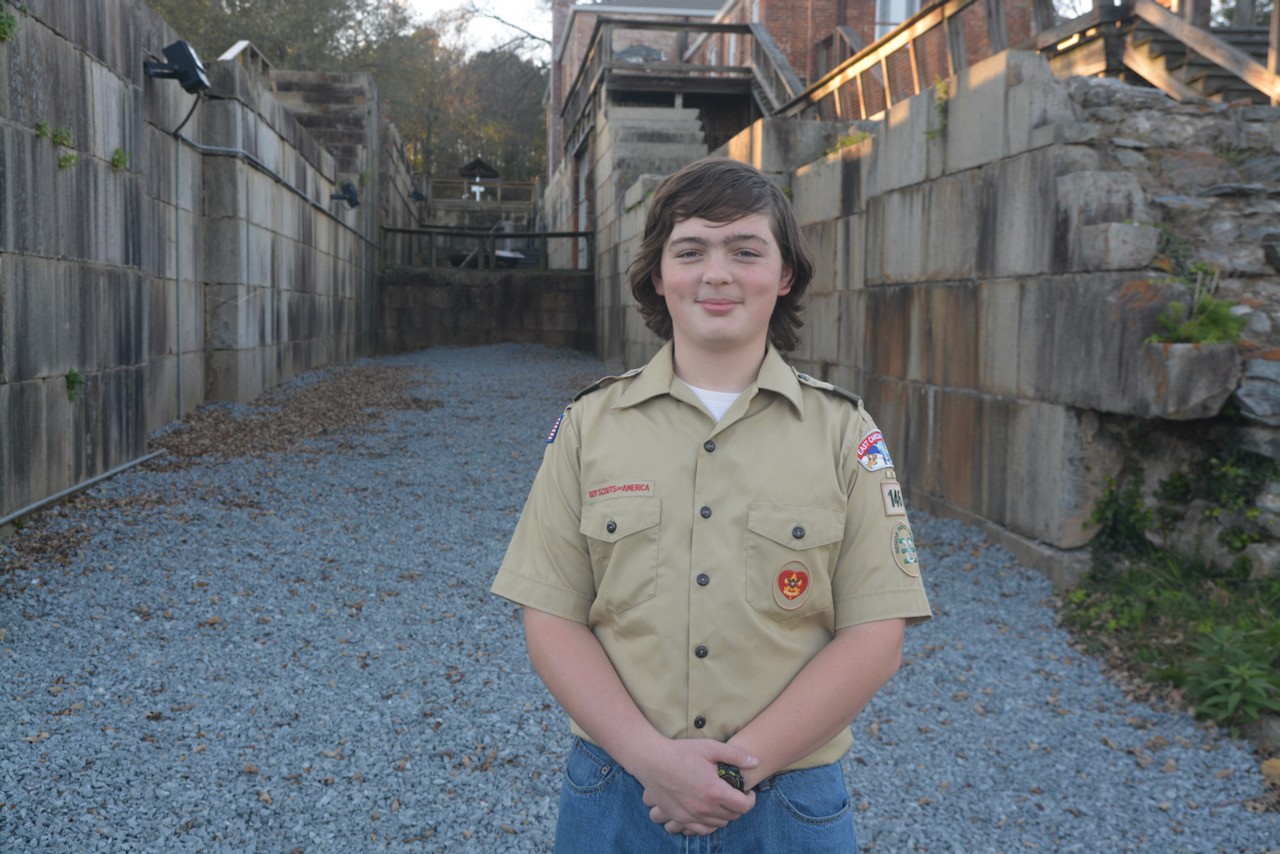 It was 366 hours of planning and labor and the work was done in downpours and intense summer heat.

The work by Jacob Spence, however, solved a problem at the Roanoke Canal Museum and was the project the 13-year-old Halifax Academy student chose to earn the rank of Eagle Scout.

A third generation Eagle Scout, Spence, a member of Roanoke Rapids Troop 146, will receive the coveted award at a ceremony on December 13.

Roanoke Rapids Parks and Recreation Department Maintenance Superintendent Ryan Newsome said the lower area of the lock at the museum — the only intact lock along the former navigation canal — stayed muddy and wet. Vegetation shot up to heights of 12- and 14-feet and it became a yearly chore to knock the growth down only to find it would hold water again.

(For those the ages of 11-18 who are interested in scouting, Troop 146 meets Tuesdays from 7 p.m. to 8:30 p.m. at the Scout Hut in the 800 block of Jefferson Street behind Roanoke Rapids High School)

“I thought it would be a challenge to do it,” Jacob said at the museum Thursday. “It was something the Canal Museum needed to be done.”

Newsome said, “It was a maintenance nightmare. It was something we needed to do. Jacob came up to me and presented a solution.”

The first task was to clear the vegetation. After that job the water was still holding and was a muddy mess up to the ankles and knees.

It was Jacob’s grandfather, Randy, also an Eagle Scout, who suggested a French drain to carry the water away.

The French drain consists of 155 feet of pipe to carry the water to an existing ditch. The first 10-feet of the drainage ditch had to be reshaped to allow for the excess drainage, Newsome said.

There was 2,500 square-feet of ground barrier placed to keep the vegetation from growing up. For this Jacob used felt from the paper mill.

He finished the job on September 26 and it was done in rains from the remnants of a tropical storm, other rainstorms as well as the summer heat.

Newsome said the French drain held up during last week’s heavy rains. “It solved a big problem. It’s been on my list ever since I’ve been here but haven’t been able to complete it due to a lack of resources or funding. It feels good to me to see the project completed. I’m excited.”

For Jacob, Scouting is a family tradition.

His father, Tim, is an Eagle Scout as well as his grandfather and there are three other family members who have obtained the rank.

Tim, a retired master sergeant with the Army National Guard, said, “It’s a lot of pride to see him learning to do these things. It’s preparing him for manhood and being an adult.”

Said his mother, Michelle, “To see the work he put in and have these roadblocks and get new plans, he didn’t give up.”

For Jacob, “It brings a lot of pride that I worked through it. I appreciate the Friends of the Canal Museum, Rightmyer Machine Rentals and the city for their help and donations and everybody that helped me.”

Said Newsome: “The city of Roanoke Rapids and the Roanoke Rapids Parks and Recreation Department appreciates all of Jacob’s hard and tireless work on this project which solved an issue we were having at a very historic structure in the city.”

Parks and recreation Director John Simeon said, “We truly appreciate the volunteer work done by the boy scouts and the time they invest in making the canal trail improvements that benefit everybody in the community.

“We have had several past and present projects that the boy scouts have assisted us on the trail with. We are proud to recognize them with a plaque that honors them at the canal museum.”