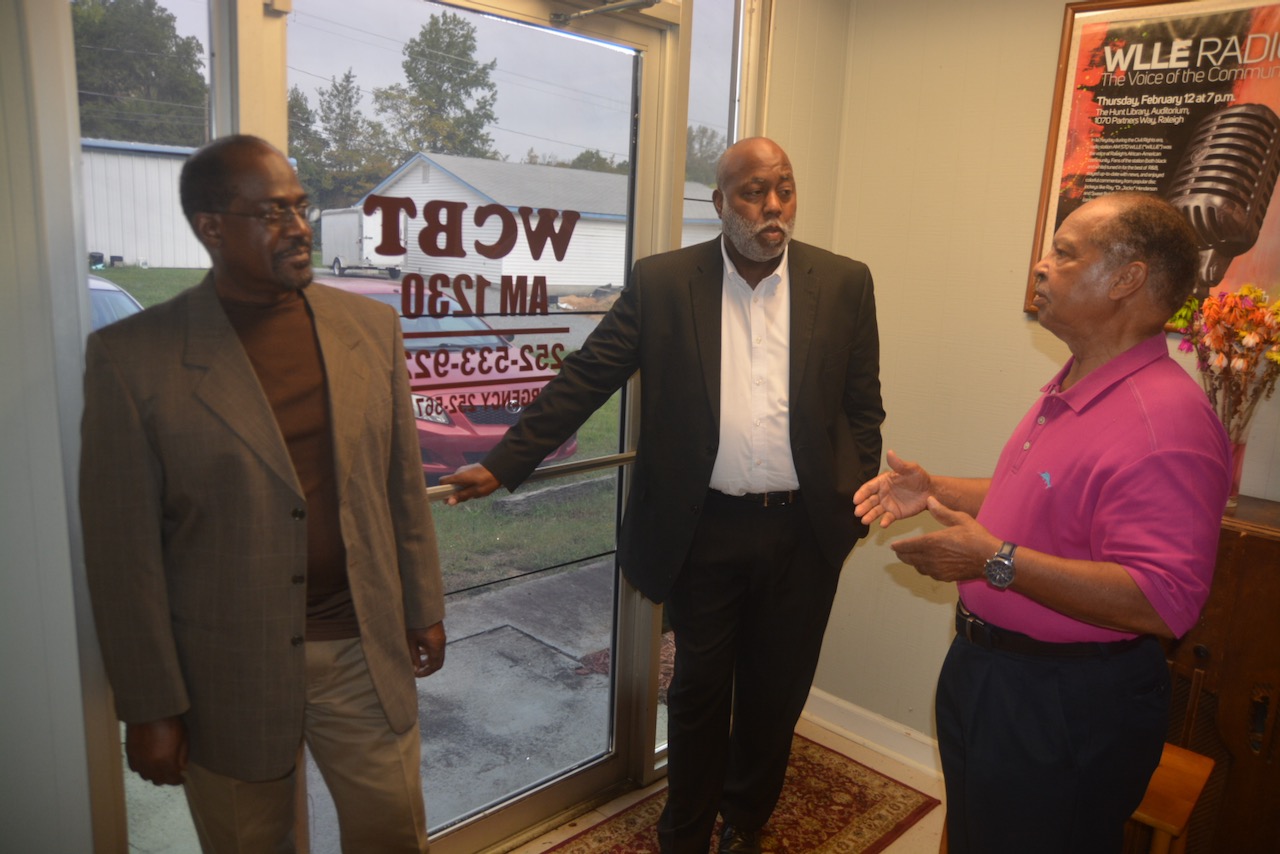 In bid for state Senate seat, Webb gets backing from clergyFeatured

The ministers with a long Democratic background assembled with Webb at WCBT to record a campaign spot for the Republican.

“It means what I am for is being able to reach all people regardless of party affiliation,” Webb said before recording the spot with Reverend Charles McCollum of Oak Grove and Piney Grove Baptist churches, Reverend Elbert Earl Lee of London Missionary Baptist Church, and state District 3 Senator Erica Smith.

Webb said he is seeking the office because he grew up in Halifax County. “I came back here to practice criminal defense law. I believe our county is a great county and I believe we need to utilize Interstate 95 running through our county.”

Being pro-school choice, Webb said he is against school merger.

Pro-school choice “actually improves education because you allow parents to choose which school their children attend. With that parent involvement those parents will have the responsibility that their kids are in that particular school.”

When Webb travels I-95, “I see millions of dollars going down the highway. We’re in the center between New York and Florida. We’ve got to be able to use Interstate 95 to establish industry and manufacturing companies based on our location.”

Webb believes local governments in the county need help from Raleigh. “I don’t think they should do it by themselves. There is the North Carolina Department of Commerce that has the division of Rural Economic Development. I think we need to partner with the state agency to make sure we get economic development in this area.”

As far as schools and the novel coronavirus pandemic, the candidate said he has mixed feelings on the matter. “I feel at this point that if the child or children are in a remote learning setting and it has proper supervision and they are properly monitored then they should stay there. For the children who do not have access to the internet and the children who are not properly monitored or properly supervised they need to be allowed to go back into the schools.”

Webb says he understands the needs of the district — Halifax, Edgecombe and Wilson counties. “The Edgecombe side of Rocky Mount, I know Corning came there. This was done by partnerships. We’ve got to have partnerships to bring business here. Halifax County can’t do it alone.”

Webb refrains from calling his plan if elected reaching across the party table. “We’re about family. We’re about doing what’s right for the community, for everyone in the community. I represent everybody.

The pastor and chancellor of Eastern Carolina Christian College & Seminary said he was drawn to Webb because of his pro-life stance. “One of the issues that’s close to my heart is the issue of live birth abortions. To ignore that I can’t do that. I’m not here to endorse anybody. I’m here to support attorney Webb in addressing the issues that really concern me and that’s one of the issues that just gnaws at my gut. I cannot fathom how anybody could kill a baby in delivery.”

McCollum said this happened in the Bible with Moses. “That’s why his mother had to hide him because the midwives were instructed to kill every male child that was born. It’s live birth abortion and she had to hide her child in order to keep him safe. When I look at the various issues there are, the personalities that stand for what is right is what I’m behind.”

The longtime minister admires Webb. “That’s what I told Sammy is that I’m real proud of the stance that he’s taken. It’s not about a party. We’re talking about issues that address us as human beings and I value the individual. Sammy has been a member of my church. He’s very proactive and I can appreciate a young man like that doing some of the things he’s doing.”

The pastor said it’s not about party lines. “To wear that Republican label and make it stand for something, he brings character and integrity to what we need in our representatives. I can appreciate the stance that he’s taking and the issues he’s addressing.”

Webb’s background and stance on issues

The attorney is a graduate of Northwest Halifax High School and from 1990 to 1991 he attended Halifax Community College before going on to the University of North Carolina at Greensboro to study political science. From 1995 to 1998 he attended the North Carolina Central University School of Law and then came back home to practice law.

“The public school system in Halifax County when I was at Northwest, there were about 1,300 of us. My class had almost 300. Now, you may have 300 at Northwest.”

What is happening in the county schools is parents are sending their children to charter or private schools. “The public schools have a task on their hands to educate those kids (the ones left behind). A lot of those kids are special needs or have other issues.”

Webb said he supports the initiative taken by state Republican leadership in the General Assembly to raise teacher pay. “The only way for Halifax County to keep qualified and the best teachers in those school systems has got to be regular teacher pay increases.”

He also believes in the concept of community schools. “I don’t think kids should be bussed hours away to go to school. I think that Halifax County will have to sit down and say, ‘Hey, do we need to put kindergarten to eighth here to decrease the cost of having a building that is virtually empty or do we need to have one central high school?’”

As for police issues, Webb says, “What I see on TV is not what I have dealt with here. I have not dealt with those types of issues here. I can’t compare Halifax County to what went on in another state.”

Webb said he would support some form of relief for the taxpayers of Roanoke Rapids as it relates to the theater issue. “When that started it was a quasi private-public issue. I disagreed with public funds that went into that theater. It was a mix of public and private. I disagree with the way that was handled. However, if Raleigh can give us some relief so that we don’t have to foot the bill for the theater I have no problem with it. I don’t think the taxpayers here need to foot the bill for that theater.”

The state’s mental health system is broken, Webb said. “When I first came back here you had Five County. Mental health was more local. Now it is someone going to a psychiatrist and they’re giving somebody medication on a regular basis. We have people here who are walking the streets that need to be housed in the mental institutions. They don’t belong in the jail. The problem is that we don’t have those things. The jail cannot deal with people who have mental disabilities.”

He believes there should be mental health reform.

“With the opioid crisis you’re talking about legalized products because those are prescriptions for the most part. Now you move to the fentanyl which is what drug dealers use. That’s a little different. When you’re buying what’s legal you have people hooked on pain medication. The fentanyl and heroin that’s not prescribed. My thing is how do you stop somebody from going into somebody’s cabinet who has legal prescriptions and they take them?

Lee is Webb’s minister. “I think he’s highly qualified for the position. You can’t change the attitude or personality of the individual but he has proven himself to be loyal and I do support him.”

Lee says Webb is firm. “I love his faithfulness from a religious perspective. He’s faithful and loyal with us at the church. We are very familiar with him.”

No matter what people say, Webb said, “America is a Christian nation … Even though it isn’t perfect, we have our faults it is still a Christian nation. Knowing that and I’m a believer in Christ when I go to the General Assembly I have to take what I believe as my foundation with me. If we take issues and we relate those issues to the Bible we’ll find most of the time the answers are laying right there.”

Scripture, he said, answers the question of why he is for job creation.

Second Thessalonians says if a man doesn’t work man doesn’t eat. “Paul is sitting there preaching all day and he’s witnessing but he’s building tents at night. He’s working. He preaches against idleness and laziness. Any government that has a program that wants to keep people lazy and idle that’s un-Christian.”

What Webb has found within the Black, heavily Democratic parts of the district like Edgecombe County there are issues that cross party lines and color. “Most Black folks are pro-life, most Black folks want good jobs, most Black folks want their children to have a good education. The leadership that has been up there all these years have not done the job that needs to be done. If it was so we would not continue to be at the bottom of education and have some of the highest unemployment rates. I feel that somehow Northeastern North Carolina has been overlooked.”

In a word, Mrs. Webb says her husband is passionate. “I’m behind him 100 percent. One thing I can say about my husband is he stands on principles. He’s going to stick to it. He’s not going to detour from that. He’s going to stand on the truth and I do feel he’s the best man for this seat.” Mrs. Webb describes her husband as an honest man. “He believes in being fair. He will fight for what is true in his heart and what he believes. It’s principle. Everything is principle. That’s the most important thing.”

Smith, who was to be the voice behind the campaign spot, said, “I am supporting Deacon Sammy Webb as a faith-based leader and I understand we are at a critical moment in our nation where we need to elect men and women of honor, integrity and character and for this race that is attorney Sammy Webb.”

Smith has known Webb for more than  20 years. “I know his family. He comes from a strong Christian family who have served in the Roanoke Valley.”

Smith places faith and values over politics. “Before I’m a Democrat, a Republican or unaffiliated, I’m a woman of God and we are in a critical moment in this nation. I am very close friends with attorney Webb’s wife. We are in a ministry circle together and we have been putting the people of the Roanoke Valley first serving in grassroots leadership. That’s what this is about. It’s time for our nation to move toward healing and groom people together.”