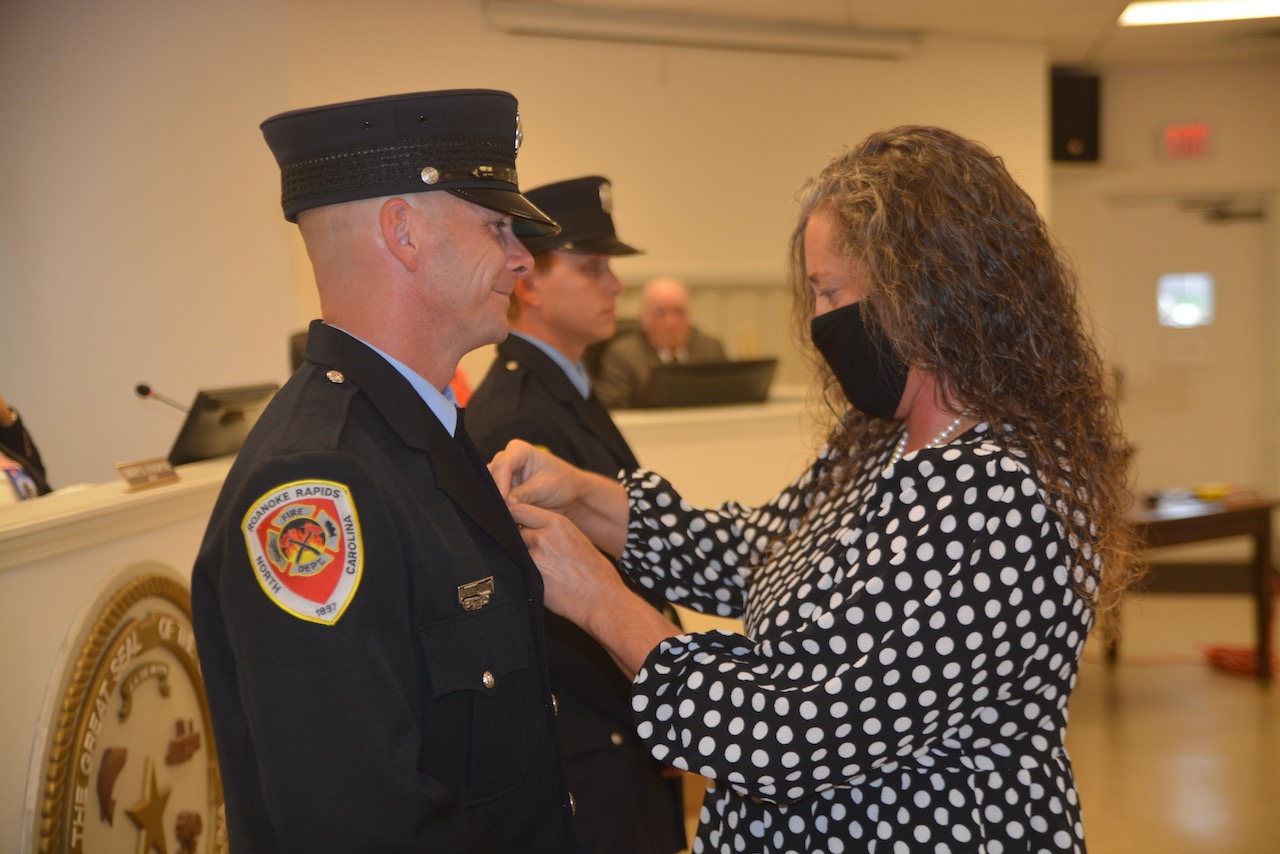 The Halifax Resolves Chapter of the Sons of the American Revolution recognized Roanoke Rapids firefighters with its life-saving medal Tuesday night during city council's meeting.

The commendations for Dylan Clark, Vincent Mollicone, Jeffrey Brown and Brandon Shearin came by the recommendation of Chief Jason Patrick and represent events in 2019 and 2020.

Ken Wilson of the chapter presented the awards.

On Christmas of 2019 Clark and Mollicone responded to an unresponsive patient on Fourteenth Street.

Both continued while EMS arrived and assisted.

After a few minutes of continued compressions and ventilations the patient regained respirations and a strong pulse.

The patient was then transported by EMS to Vidant North Hospital.

On May 21 Shearin and Brown were dispatched to Monroe Street to a call a woman was unconscious and not breathing.

Firefighters immediately started CPR.  After minutes of CPR and administering a shock to the patient, she regained and sustained a pulse.

Once the patient was stable EMS transported her to Vidant North Hospital.

“On behalf of the SAR and the citizens of Roanoke Rapids, I say thank you for all your efforts.  You are greatly appreciated,” Wilson said.

Meanwhile Tuesday, Patrick recognized promotions within the fire department as well as a new hire.

Chris Horvath was promoted to battalion chief and his wife Hazel pinned his badge.

B.J. Harris was promoted to battalion chief and his wife Emily pinned his badge.

Ramah Long was promoted to lieutenant and his daughter Harper pinned his badge.

Chad Turner was promoted to lieutenant and his wife Allison pinned his badge.

Patrick Peagram was promoted to engineer and his wife Kelly pinned his badge.

Hunter Whitmire was named as a new hire and was pinned by his mother Tina.