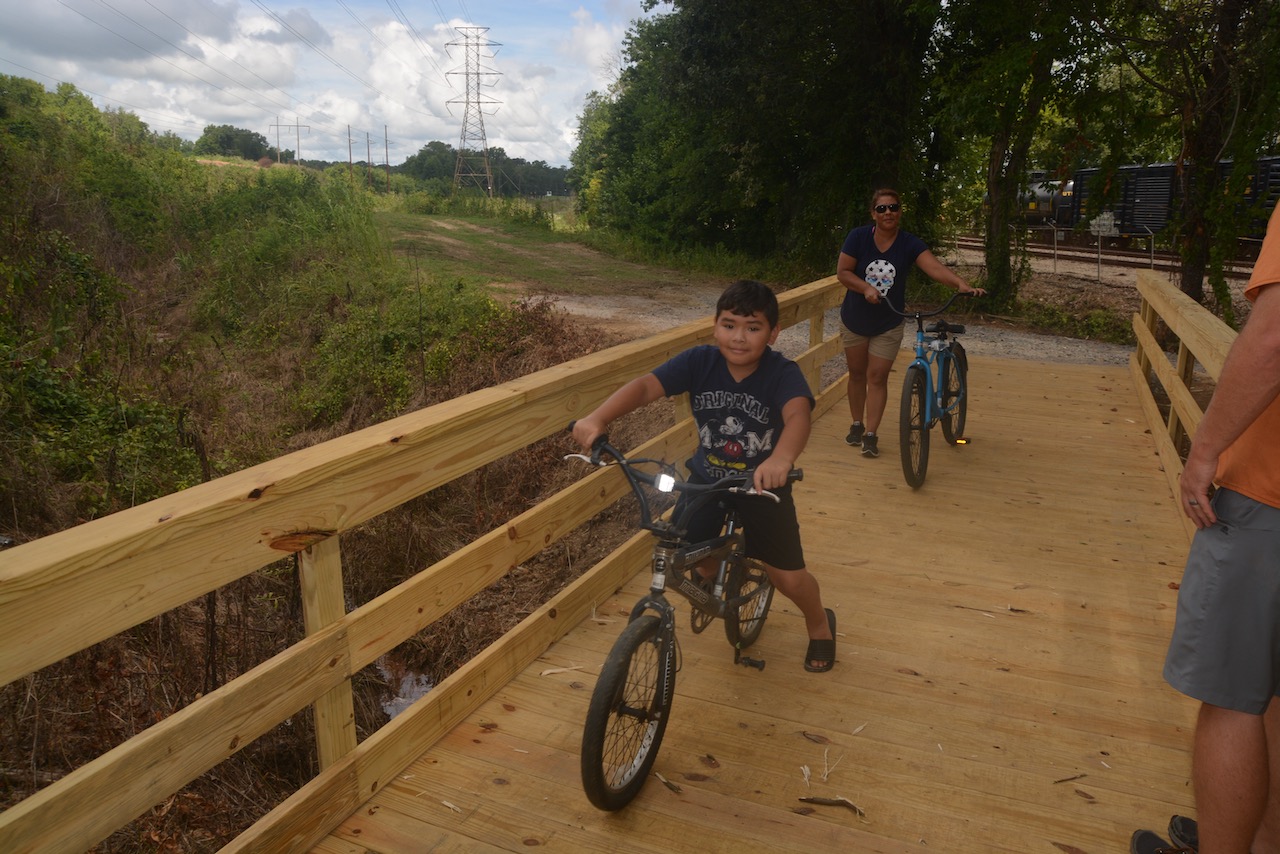 From flatbed to footbridge, partnerships lead to new pathwayFeatured

A local company has turned a flatbed trailer into a sturdy bridge on the Roanoke Canal Trail.

The new bridge is located about three-quarters of a mile from the Roanoke Canal Museum and leads users to the River Road section of the trail.

“It was just old,” said Roanoke Canal Museum Cultural Resources Leader Ryan Newsome Thursday. “The deck boards needed to be replaced, and the structural supports were starting to age as well.”

M.J. Price Construction provided a flatbed trailer which became the bridge. It was sandblasted, new decks were put in and the structure was anchored by concrete pillars.

The new bridge is almost double the size of the old structure.

The trailer had been situated on the trail just past Roanoke Avenue since March. “It took a lot of heavy equipment and really dry weather (to complete the project),” Newsome said. The bridge was completed Monday.

“It was in definite need of repair,” parks and recreation Director John Simeon said Thursday. “The canal commission and Lori Medlin with the Halifax County Convention and Visitors Bureau collaborated with M.J. Price Construction to see if there were alternatives to replace the existing bridge.”

Simeon said Mason Price “had a vision and brought his vision forward to the canal commission, Lori Medlin and the recreation department with a solution that greatly exceeded our expectations.”

Canal Commission Chairman Greg Lawson said he and retired parks and recreation Director Chris Wicker had patched the bridge up about a year ago.

The canal trail has 6,000 visitors a quarter, which translates into 2,000 visitors a month. “When the pandemic hit it really skyrocketed,” Lawson said.

The commission seeks out partnerships with businesses and tourism such as the one which led to the new bridge. “Mason and WestRock all volunteered to move forward and get it done for little of nothing.”

Lawson said the trail is part of the history of Roanoke Rapids and played a part in building the city through commerce and industry.

The partnerships developed with business, tourism, friends of the canal, and the town of Weldon which maintains its part of trail, are designed to keep the trail managed, to make sure it will be here a very long time. It’s an asset we can build on. The possibilities are unlimited on how we can build it up.”

The bridge is located adjacent to WestRock and users can see the work done at the chip yard and see trains, tractor-trailers and other vehicles coming and going. “WestRock has always been a great community partner over the years and we truly appreciate their cooperation with the canal trail,” Simeon said. “I would sincerely like to thank Mason and Lauren (Price) and M.J. Price Construction. It is people in the community like them who strive to make our community a better place to live.”