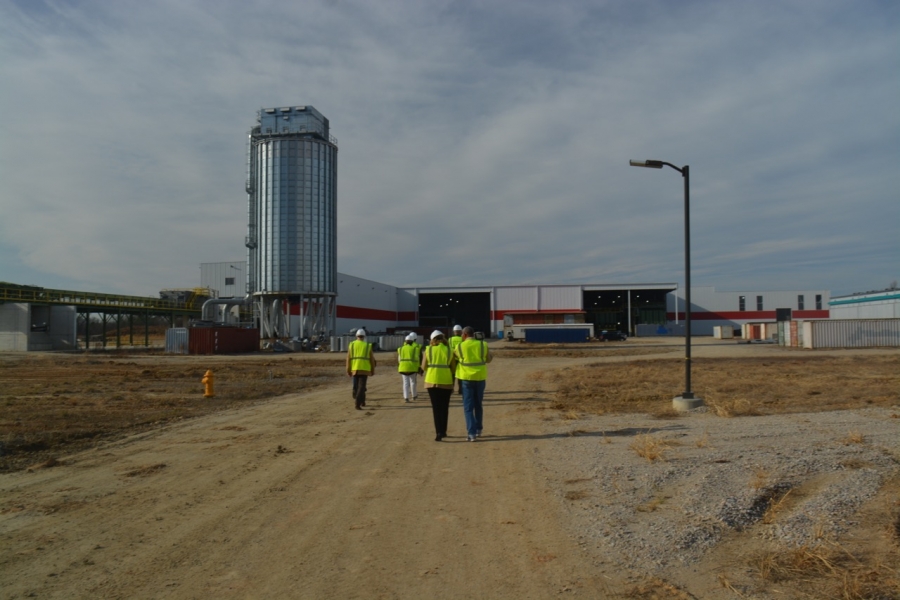 Klausner Lumber II and Halifax County have reached a settlement which will be the focus of a hearing in the United States Bankruptcy Court in Wilmington, Delaware.

Halifax County Attorney Glynn Rollins confirmed this morning the settlement has been reached and must be approved by the federal court.

The hearing is set for 3 p.m. on August 20 and the deadline for objections to be filed is August 11, according to documents filed in the federal bankruptcy court.

“The goal of the settlement is to have a new owner purchase the property through the bankruptcy proceedings and bring the facility online and put people to work,” Rollins said.

Documents filed in a civil lawsuit by the county say on March 16 the Enfield-based Klausner Lumber II dismissed all of its employees and left the building unattended.

According to the motion by Klausner seeking approval of the settlement in the federal bankruptcy court, Klausner “was to be one of the first new sawmills built in the United States for some time. Using European technology that would result in efficiencies of operations and production, and far greater utilization and less waste of raw materials, the operations would, if successful, have a competitive advantage over traditional domestic U.S. lumber mills. In addition, the debtor was located in a rural, timber-rich area surfeit with local raw materials, and a populace that would greatly benefit from (a) new, large employer in the region.”

Over $166 million was invested by Klausner to build the facility from the ground up and “attempt to make it operational. Such funds were raised through shareholder and related-party loans and capital, and an indirect investment by foreign investors taking advantage of the EB-5 Immigrant Investor Program offered by the United States through the debtor’s prepetition lender, an entity named Carolina Sawmills L.P. which is an affiliate of the debtor.”

Halifax County provided $7,757,621.91 in direct and indirect grants, support and infrastructure, activities which included the purchase and contribution of land and “building out roads, water, sewers,” the motion says. “Such governmental support greatly assisted the debtor’s attempt to build a state-of-the-art sawmill. The county’s support was provided with the hopes and expectations that the debtor’s business would generate a substantial number of jobs in an area that historically did not have large local employers. The expectation was that, in time, the debtor would have an annual capacity to produce 250 million board-feet of lumber and employ approximately 350 local workers.”

Construction of the sawmill began outside Enfield off Highway 301 in 2014. “Several setbacks and delays occurred during construction over the next several years, and the debtor’s sawmill never became fully operational, which caused a drain on liquidity,” according to the motion. “In addition, the debtor’s foreign related parties appeared to be having financial issues of their own. That recently culminated in foreign insolvency proceedings being filed by two related parties on April 15, 2020 — Klausner Nordamerika Beteiligungs GmbH and Klausner Trading International GmbH — in Austria’s Innsbruck Regional Court.”

Pursuant to an Economic Development Agreement executed by the county and Klausner on or about November 1, 2012, the county conveyed approximately 430 acres of land that the county acquired for the sawmill site by a deed filed on January 6, 2014.

However, because the company did not pay monetary consideration for the real property, the county reserved or retained a future interest in the property known as a right of entry or power of termination which could be exercised by the county if Klausner failed to complete construction and commence operation of its sawmill facility within 24 months from the date of recording the deed.

After the construction process started, on March 26, 2015, a deed of trust was filed against the company’s interest in the real property to secure a debt obligation of the proposed sawmill to Carolina Sawmills in the principal amount of $75 million, those funds coming from the EB-5 investors.

The county’s right of entry in the real property was not subordinated to this deed of trust, the motion says.

“Since entering into the EDA, the county has asserted that it spent $7,757,621.91 on the project site including the funding for the acquisition of the real property, improvements in public roads, water, storm water and wastewater systems, and construction of a rail spur.

That never happened and late last year “the county made formal demand for repayment of the economic incentive amount. That demand letter also notified the debtor of the county’s intent to exercise its right of entry on the debtor’s real property.”

The novel coronavirus pandemic, “combined with the debtor’s ongoing precarious financial standing made the debtor’s continued operations — such as they were — difficult. These financial and medical hurdles came to a head when the debtor’s sawmill shut down on March 16, 2020.”

On that date, Klausner dismissed all employees and left the facility unattended, while it was still in the commissioning phase and the sawmill never became operational.

On April 9 the county exercised its right of entry by recording the action in the county’s public registry which, according to the motion, effectively terminated Klausner’s rights to the property and extinguished Carolina Sawmills’ security interest in the property under the mortgage.

On April 13 the county filed an action in the state court seeking, among other things, a declaratory judgment concerning the exercise of its right to entry and to recover the funds it had expended for land acquisition and necessary improvements.

A  few  weeks  later,  the county also undertook to insure the property, cover the utilities, and provide security at the property.

“The county’s position appeared to make any restructuring or sale of the debtor impossible,” the motion says. “While the county’s actions may be challenged under breach of contract theories as well as bankruptcy avoidance actions, such litigation would take substantial time with an uncertain outcome, during which no sale process could effectively be run. Nor would there be sufficient available funding for such litigation.”

Over the last several months, Klausner and its bankruptcy professionals have held discussions with the county concerning a potential settlement of the disputes to allow Klausner to sell the property along with the rest of its assets “which preserve the potential that a buyer might purchase substantially all of the assets and finally fulfill the original objectives of the EDA to bring good jobs to the county.”

The comprehensive settlement, the motion says, allows a path forward to a sale or reorganization in this case.

As a result of the negotiations between Klausner and the county and final approval by the bankruptcy court, the county would receive a payment for all reasonable documented, out-of-pocket costs since the company abandoned the property.

Klausner and the county have agreed to sell the property along with certain personal property for a minimum price of $11 million.