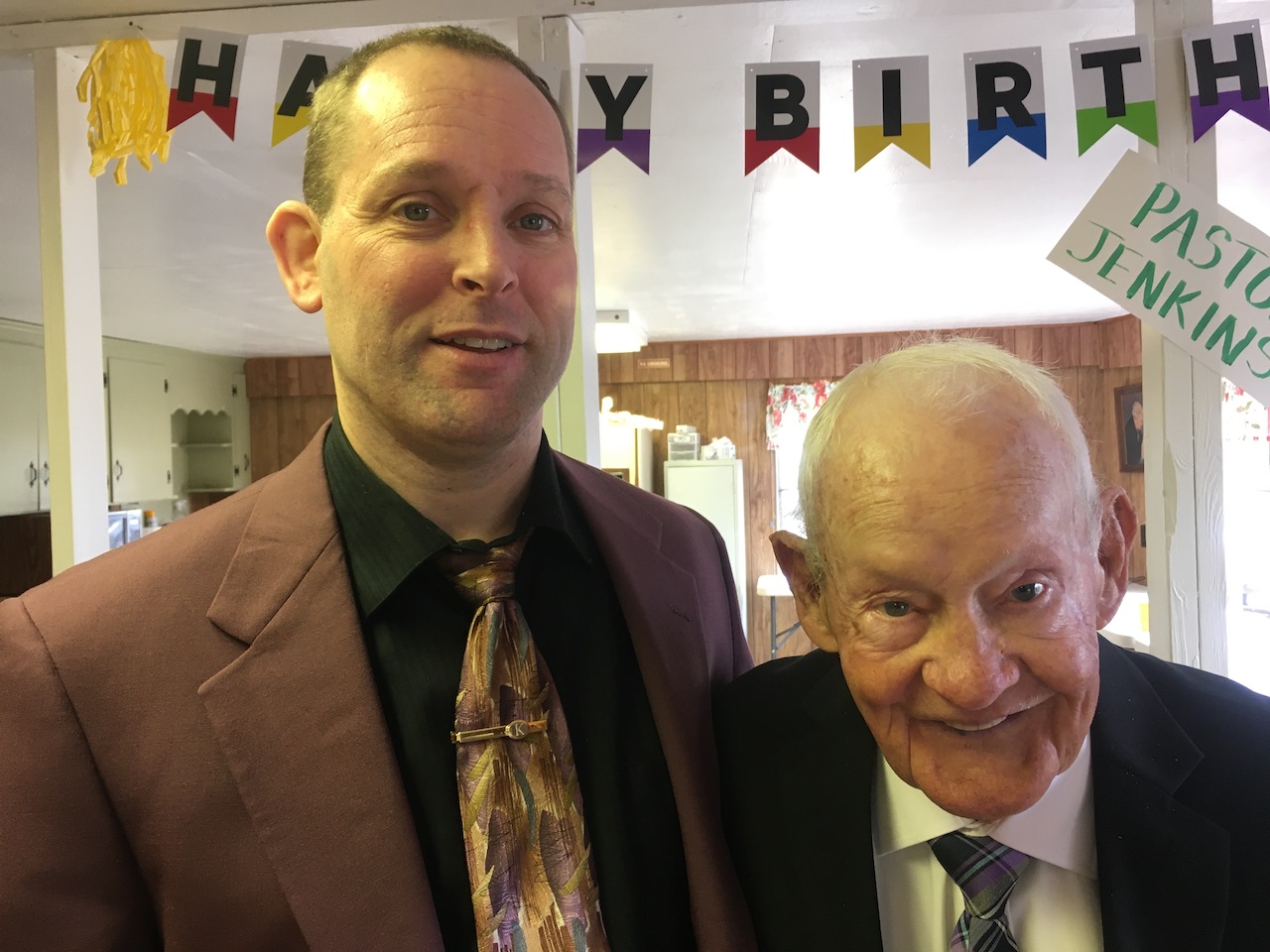 The members of Bethlehem Baptist Church have canceled their worship service for Sunday and will meet at Little Country Baptist Church on Thelma Road to honor that church’s founding pastor — 94-year-old James Lewis “Simp” Jenkins.

Jenkins was to be guest minister at Bethlehem as part of three events celebrating Bethlehem’s 130th anniversary.

However, according to Dr. Francis Kyle, Bethlehem’s minister and scholar in residence, Jenkins’ health is weak and frail, thus the decision to attend Little Country’s 11 a.m. service at its location on 754 Thelma Road.

Kyle said the decision is a way to bless Jenkins. Proper social distancing and other recommended gathering guidelines due to the novel coronavirus for houses of worship will be followed.

“Pastor Jenkins has become a dear friend and inspiration to me since learning of him soon after my arrival at Bethlehem in July, 2019,” said Kyle. “With Bethlehem playing a significant role in Simp’s conversion, early spiritual growth and call to the gospel ministry, his oral history of both Bethlehem and Halifax County have been invaluable to this newcomer as I research the historic rural church and area.”

Said Kyle: “His physical body may be falling apart, but Simp’s mind and memory are still sharp. He understandably is eager and ready to meet Jesus face to face and be reunited with loved ones in heaven. But the Lord is not done with him here on earth. Bethlehem and I are excited to join Little Country’s worship service and be blessed by hearing for the first time the 94-year-old Bible preacher.”

Besides Jenkins’ physical inability to guest-preach at Bethlehem, the church’s other two anniversary events this year have been postponed because of the novel coronavirus pandemic.

(The three events are scheduled for 2021 and more information can be found by visiting Bethlehem’s website; calling the church at 252-308-4082; or by email at This email address is being protected from spambots. You need JavaScript enabled to view it.)

Bethlehem had a significant impact in Jenkins’ life and future ministry from the 1950s to the 1970s.

While an illegal whiskey bootlegger, Jenkins converted to evangelical Protestant Christianity through the door-to-door evangelistic ministry of Bethlehem’s visitation team.

He professed faith in the Lord Jesus Christ while on his knees by a dog pen on his Zoo Road North property.

His bootlegging days came to an immediate end. Some six months later Jenkins was baptized by immersion in Deep Creek.

Under the leadership and mentorship of Pastor Raymond L. Britton Sr. — 1923-2003 — Jenkins then joined the visitation team and began to teach Sunday school.

In January 2017, Jenkins officiated the funeral for his close friend and esteemed educator Kenneth E. Brantley — 1928-2017.

In addition to being a longtime Bethlehem member, deacon and Sunday school teacher, Brantley served as Halifax County Schools superintendent, a Halifax County commissioner and a board member on a variety of community entities.

The two men had an agreement — whoever died first, the other would officiate their funeral.

Jenkins was ordained to the gospel ministry on March 24, 1974, at a church that he founded. The late Rev. David J. Crawford — 1932-2019 — then pastor at Bethlehem, served as moderator of the ordination council.

The ordination service occurred at Boseman which was situated along Highway 48.

Roanoke Rapids Mayor J. Lloyd Andrews — 1929-2019 — was present and, with shovel in hand, helped with the groundbreaking of Little Country’s new church building.

In 2006, and with Jenkins being 80-years-old, the congregation paid off in full the church’s mortgage.

In addition to pastoral ministry, Jenkins has ministered in homeless shelters, rescue missions, prisons and nursing homes in Halifax County.

He counts among his ministerial mentors Raymond L. Britton and the evangelist Carson Blanton — 1915-1972 — the founding superintendent in 1951 of Union Mission in Roanoke Rapids.

The plain and direct preaching style of his fellow North Carolina native Billy Graham — 1918-2018 — has provided decades of inspiration for Jenkins’ own evangelistic preaching.

And, like Graham, the historicity of and theological meaning behind Jesus’ crucifixion at Calvary in Jerusalem has been a central theme in Jenkins’ long preaching career.

Minus only about five years, the entirety of Jenkins’ life and ministry has been in Halifax County. He spent less than a year at Camp Peary in Virginia when drafted by the U.S. Navy during World War II.

And for a couple of years he lived with his wife and daughter in Jacksonville, Florida, and Roanoke, Virginia, while employed as an assistant superintendent of homeless shelters.

William Simpson “Simp” Jenkins — 1814-1905 — fought in the Civil War as a Confederate States of America soldier.

While growing up on Monroe Street in Roanoke Rapids, the once avid raccoon hunter, former land surveyor under Jacob C. Shearin — 1904-1984 — and self-described “country boy” has fond memories of his time on the farm of his beloved maternal grandparents, George Franklin Herrin — 1873-1943 —and Linnie Roseza “Rose” Kennedy Herrin — 1886-1982.

The grandparents, other family members and many of Jenkins’ friends are buried in Roanoke Rapids’ Cedarwood Cemetery.

The congregation began as a brush arbor church. They then built a wooden structure in 1895 along what is now Highway 903, about a mile east of Everetts School Road.

Current attendees include descendants of the original Pepper and Shaw families.

While helping his wife raise their seven children, Bethlehem is one of 21 rural churches in six northeastern North Carolina counties that Wilcox served during his 42-year pastoral and church-planting ministry from 1879 to 1921.

The six counties are Halifax, Martin, Nash, Northampton, Wake and Warren and some of the churches Wilcox pastored, founded or helped organize construction included Enterprise Baptist near Littleton, and First Baptist and Quankie Baptist in Roanoke Rapids. Wilcox died in 1921 while the pastor at Halifax Baptist.

The Brinkleyville native also served as clerk and treasurer of the Tar River Baptist Association, which was established in 1831.

He was ordained to the gospel ministry at age 34 in 1879 at Bear Swamp Baptist Church, the church of his upbringing.

Though no longer owned by the Wilcox family, the Wilcox plantation home — 1853-1980 — south of Roanoke Rapids, is on the National Register of Historic Places and has been since 1982.

The house is known as the Gray-Brownlow-Willcox House or LaValle and is situated along Highway 48, near Medoc Mountain State Park.

For the 100th anniversary of the death of Wilcox, Kyle is planning a commemorative event for April 2021. This will be in conjunction with Bethlehem’s 131st anniversary, to also be commemorated the same month.

The cemetery the church inherited and expanded has the remains of some Confederate States of America soldiers.

The church’s peak membership years of more than 300 occurred in the 1950’s under pastors Joseph W. Riggan and Raymond L. Britton.

The longest, more recent pastorate, from 1993 to 2005, was that of John Rowland. Rev. Rowland left to pastor Outer Banks Baptist Church in Kill Devil Hills, where he remains pastor.

Bethlehem is a member of the North Roanoke Baptist Association and Baptist State Convention of North Carolina.

If a community member has any photographs, documents or oral history related to Bethlehem Baptist Church or Jenkins, contact Kyle at 252-308−4082 or This email address is being protected from spambots. You need JavaScript enabled to view it.