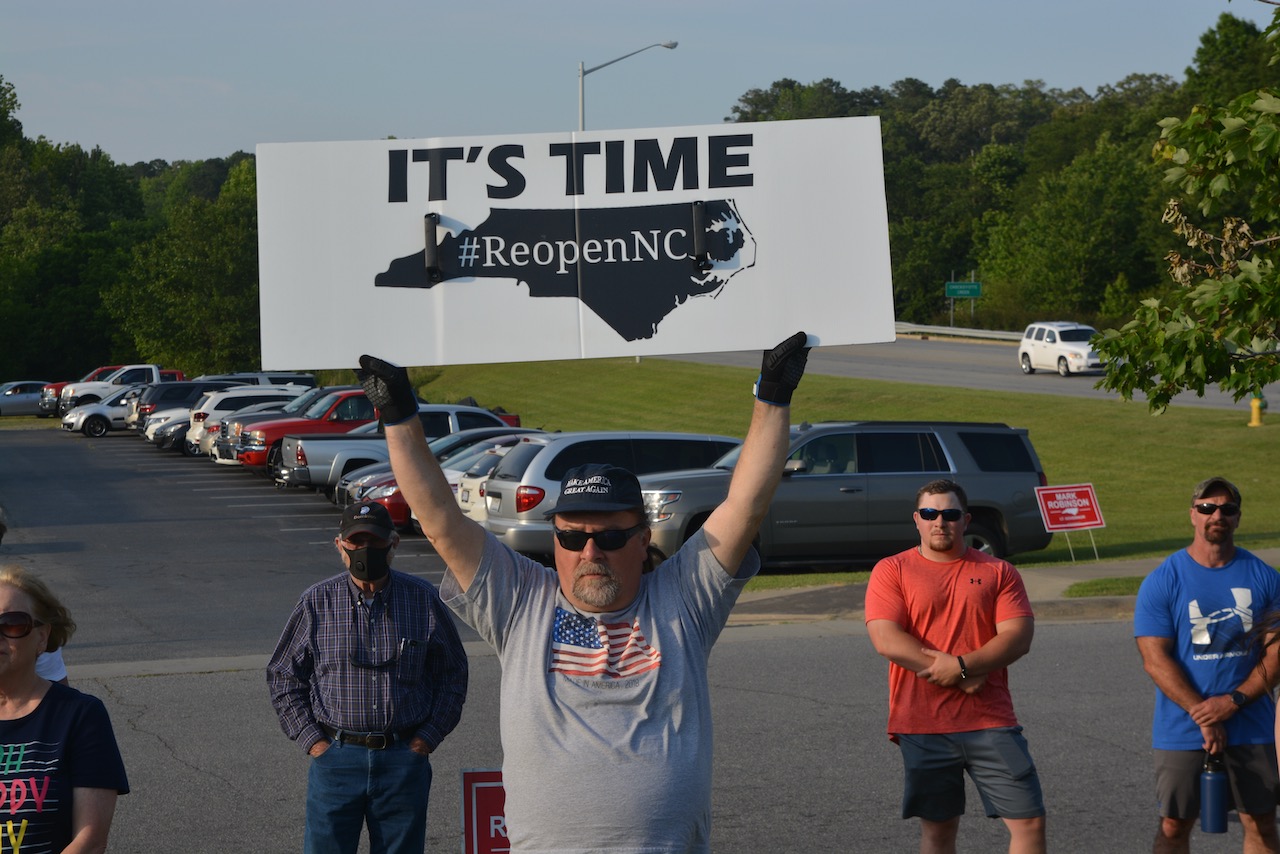 Three of the four gym owners cited Thursday for violating Governor Roy Cooper’s Executive Order 121 spoke at a rally that evening calling for the businesses to be deemed essential.

The citation says there is probable cause to believe the defendants named “unlawfully and willfully did violate Executive Order 121 issued by Gov. Roy Cooper (on March 27) … to wit the defendant operated a business or operation as prohibited by (the executive order).”

The citation carries a $500 fine and the owners are scheduled to appear in Halifax County District Court on July 27 at 2 p.m.

Martin said he was not at liberty to comment on whether there was any political pressure placed upon the police department, as was indicated at the rally, to issue the citations.

“As a law enforcement officer I’m often asked the question would you be willing to enforce a law that you do not agree with and my answer is yes. That’s what I applied to what I had to do yesterday.”

Asked if he wanted to issue the citations, Martin referred to the previous statement.

“He didn't want to do it,” Story said of Martin following the rally which was held at New Day Fitness. “Bobby is a great man. Bobby is a great leader for our community. I have been proud of Bobby on more than one occasion and I was proud of Bobby today. Bobby handled that in the best possible way he could. It was handled with respect towards us. He’s got a job to do and unfortunately sometimes it’s a job he may not agree with but at the end of the day he’s still got a job to do.”

Story has secured legal representation, but said, “Honestly I plan on representing myself for the majority of it. In my opinion it’s wrong. We’ve got to do something.”

He said he was expecting the citation to come. “Absolutely I knew it was coming and it finally did. We have a court date and if it ends up we have to go to court to defend ourselves we will. I don’t know if we’re going to have to pay $500 or not.”

Story said his gym on its own reduced its capacity to 20 percent. “We on our own installed more hand sanitizing stations than we originally had. We informed our clients that they had to clean behind themselves along with our team of people that are cleaning. We set a lot of different things in place so we could do business in a safe manner.”

Crowley-Deloatch plans to keep New Day open. “I’m going to stay open. I’m not closing the gym,” she said after the rally.

She has retained an attorney. She said she was pleased with the show of support at the rally. “I feel really good. I’m very blessed for our community coming out to support us.”

Halifax County Sheriff Wes Tripp, who was also one of the speakers, said before the start of the event, “Each law enforcement officer has discretion in what orders and law they enforce and that’s why I respect Bobby and his decision. This is not about Bobby Martin. It’s about supporting our small businesses.”

Comments at the rally

Crowley-Deloatch said she has been in business for 38 years starting out with a small gym in Forest Hills Shopping Center.

“I remember the heroes I had trained — Amada DeVilla, Sarah Adams — people who were doctors, influential people in this town that built the Roanoke Valley. I kept hearing their voices going on my head as we were going through this lockdown. I thought what would they do, especially Sarah Adams when she was one of the first women to stand up for women’s rights when women could not work in this community.”

She believes Adams would have told her, “This is not right. Something has to be done. People are losing their jobs. People can’t work. Some people aren’t getting stimulus checks.”

The events leading up to her decision to reopen started with a text to a state representative on “what could be done for the Roanoke Valley to reopen these businesses while the economy is going down. I’m really worried for our community. Not my gym, but our community.”

The reply was to send an email. “I didn’t take that too well.”

The next week she got a phone call saying no email was received. “I decided to have a meeting in my studio and invite small business leaders in because I’m a member of the chamber of commerce. I’m a community person. I’m not a politician. I’m an entrepreneur. This is not about politics. It’s about community.”

She and the leaders brainstormed and she met with the sheriff. “We talked about how we could reopen our community safely with the virus. What we could do to make sanitizing kits. We didn’t get in here to make it political. People were worried they were going to lose their businesses, pay their bills. That was my whole intention.”

Three months passed and the gyms were not reopened, she said. “Now we don’t have income coming in and I’m still paying employees.”

For the first eight weeks she did not open. “I did what the governor told me to do because I submit to authority. But now, no. I opened up after eight weeks because it’s wrong.”

Everything went well, she said, until the police department received a call from the governor’s office. “They are forced to give us a ticket. It’s time to make a stand. This is not right and I’m here to make a stand in the Roanoke Valley with you because I’m upset right now. It is not breaking the law for me to go to work. I’m going to work. I got charged a $500 ticket and, guess what, I’m going to work again in the morning.”

Tammy Podruchny-Fell and her husband Mark have owned The Gym since September. “Little did I know I’d be standing here now in front of all you guys trying to explain to you why I think we’re essential. The way I look at it is people join gyms for different reasons. Some people need to get fit, some people need to stay fit. Some people just need a release from life. We don’t know what’s going on in anybody else’s life. We don’t know the stresses in their life, we don’t know the abuse they’ve taken home. We don’t know that this is not the one or two hours a day that they have to actually get away from whatever’s going on and be who they want to be. For that reason I believe we are essential.”

Tripp said, “When the pandemic started we were all scared. The governor put in executive orders to flatten the curve and other measures to curtail the overflow of our hospital system. Well, damn, the mission is accomplished. However, the government keeps moving the goalpost. Weeks now have turned into months. Now we must learn how to live with this virus and we need to respect it and not cower to it.

“Others have the right to stay at home but ladies and gentlemen, you have the right not to. North Carolina once was known for being first in freedom. We must open up North Carolina. Our economy worsens every day and if we’re not careful we’ll not have an economy to go back to.” Tripp someone said with this virus some are showing their true colors. “I don’t know about y’all but I’m showing my true colors — red white and blue. We can do two things at one time. We can take care of our most vulnerable people and also fix our economy to make it better. We cannot let fear rule the day and I’m tired of them playing the fear card.”

Tripp said, “It’s time for us to move on. A dictatorship is a government social solution where one person makes all the rules and decisions without any input from anybody else. It’s not right. A federal judge in the eastern district has already questioned the constitutionality of religious restrictions.”

Science, Tripp said, has given guidelines on how the public protects itself. “It’s now time for us to start living our lives, doing what we’re supposed to do to make sure we take care of our own safety and welfare.”