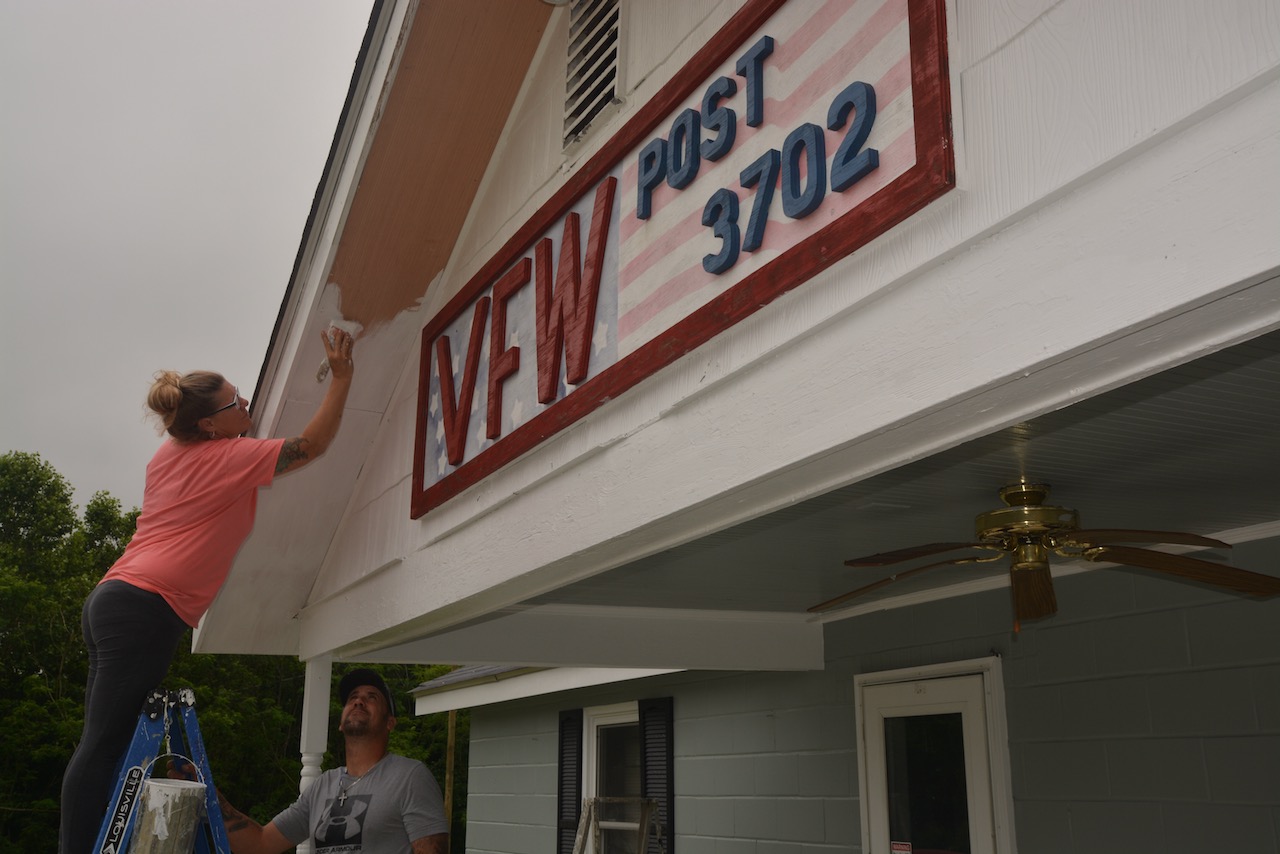 VFW Post 3702 has received a makeover thanks to the work of Candi and Mike Taylor and their company Twist Your Wrist Painting.

“It’s probably one of the best things that anybody has done for the VFW,” said Commander Jimmy Baugham. “They’ve taken their time and volunteered to do it and they’ve done a great job.”

Both Candi and Mike have had their share of turmoil over the years, they said Tuesday as they put the finishing touches on the post home, which is located at the crossroads of Bolling and Thelma roads.

The job at the VFW post is something they wanted to do, the couple, coming up on their 13th wedding anniversary, said.

“For me, it’s just been self-will,” Mike said of the effort to move to a point of sobriety in his life.

While the couple currently reside in Pikeville, most of their jobs have been local, Candi said, and they are looking to move back.

One of the things they noticed in their jobs was the condition of the post home.

Mike’s father is a Vietnam veteran. “Veterans don’t get enough credit or respect,” he said.

Candi’s stepfather is also a Vietnam vet.  “They don’t get what they deserve. People don’t recognize the vets of this country. If it wasn’t for them, we wouldn’t have the freedom that we do.”

The post supplied the paint and Twist Your Wrist supplied the labor. The paint crew agreed. “Some of the guys didn’t mind helping us out,” Mike said.

The job the Taylors did at the post was more than just painting. They power-washed before doing the paint job, cut down bushes, and removed and replaced rotten boards around the building.

Candi was pleased with the job. “It means a lot to us,” she said.

For Mike, “It feels really good to know we can do something like this. It gives you a good feeling about yourself.”

It is also a reconciliation for him. “I was a follower. I wanted to be a leader. I realized that you’ve got to put your feet down and get off your tail.”

In this gallery, the before shots provided by the Taylor

When the work was finished Tuesday evening, Candi said, “We both had tears in our eyes. It felt good that we accomplished this and giving back to veterans made it even better.”

The job outside the post was not the only thing done at the building, Baugham said. There are improvements inside the building as well. “We painted three rooms — the kitchen, canteen and pool room and we’re getting ready to paint the banquet hall. If it hadn’t been for the volunteers it would have taken us 10 times longer.”

Baugham said during the work, people would come up and donate money for the paint. “It’s been a good community thing.”

As far as the work the Taylors and their crew did on the outside of the building, Baugham said, “They have really spent some time up here. Candi’s been the backbone and glue that keeps everyone together.”