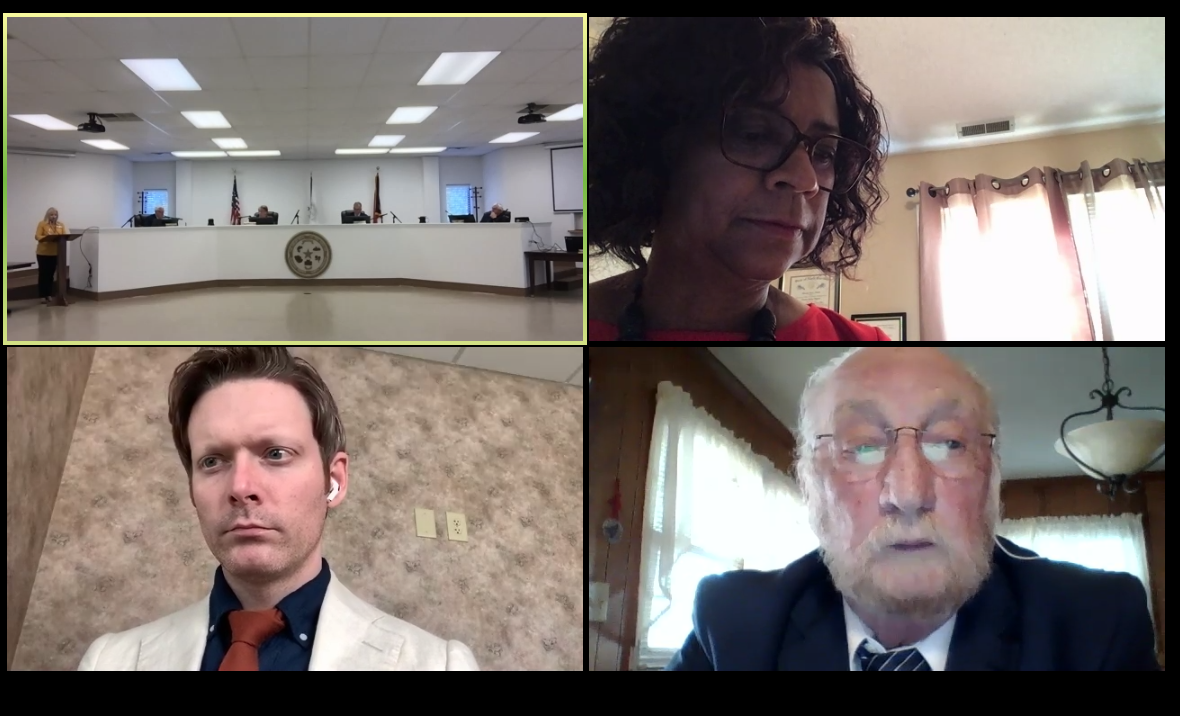 As the Halifax County Public Health System said Tuesday now is not the time to reopen businesses or back off directives, one Roanoke Rapids city council member expressed concerns about the impact the novel coronavirus is having on small business in the city.

Council met Tuesday night using a webinar format through the Zoom application to comply with social distancing directives. The meeting came as the county reported its 39th positive case.

Councilman Wayne Smith, who attended the meeting remotely, has concerns not only with the affects on businesses but with orders and restrictions currently in place. “I’ve got a lot of concerns about small business people in the town. We’ve got a lot of stores that are shut down. Most of the major stores in town like Walmart and food chains and places like that are able to function — grocery stores, liquor stores, car dealers, some furniture stores. The only things we’ve got shut down now are the small business people, people on the avenue and the small businesses around this town.”

City Manager Joseph Scherer, who was at Lloyd Andrews City Meeting Hall, said Main Street Development Director Christina Caudle told him one of the businesses on the avenue requested to be deemed essential and received approval 24 hours after submission. “She’s reaching out to other businesses as well to see if they want to do the same thing.”

Smith said, “We can’t afford to let the businesses go out.”

Mayor Emery Doughtie, who presided over the meeting at Lloyd Andrews City Meeting Hall, asked City Attorney Geoffrey Davis, who attended the meeting remotely, if he had heard of any changes coming down the pike from Raleigh.

Said Davis: “I’m not aware of any. Really, in this context, the governor is the one that gets to call the shots. Certainly, if he were to relax some of the restrictions, certainly the next natural step would be for the city to take a look at its emergency declaration and what we would need to do to bring that in line or revise that.”

Scherer said he agreed with Smith that a letter should be sent to the governor, but believes it would be more effective if it came from the county commissioners and requested the entire county be considered for relief.

Smith also brought up the 9 p.m. to 6 a.m. curfew the city currently has in place, “that maybe it’s getting close to the time to lift it and let people start moving around if they want to.”

Councilman Carl Ferebee, who attended the meeting remotely, said he had mixed emotions on the curfew. “I do believe that opening a little too early could create some issues there. At the same time I do believe with some sort of guidance that reopening of some of the businesses could be done adequately.”

But, Ferebee said, “Lifting the entire ordinance may create an issue.”

Smith said he has a lot of concern about the health department and the manner in which it is releasing information on cases. “They won’t tell us where the virus is, whether it’s in Roanoke Rapids, whether it’s in Halifax, Enfield or nothing. The only thing they do is tell us we have cases. If the people were aware of the area that this virus is they could stay out of this area. If it’s Roanoke Rapids, then we need to stay shut down. We need to know the areas. We don’t even know how many cases are in Roanoke Rapids. We’re being left in the dark and we shouldn’t be left in the dark. The county should, if nothing else, let the leaders know what’s going on. We know nothing more than anyone else does.”

Scherer said he has had that discussion with Robistow, who has indicated by law he is not able to provide that information.

Councilwoman Sandra Bryant, who attended the meeting remotely, said it is her understanding that because of the Health Insurance Portability and Accountability Act the county is not allowed to release that information.

Ferebee said there has to be some order. “If it is opened up, let’s just say Roanoke Rapids doesn’t have that many, guess what — everybody’s going to come to Roanoke Rapids.”

Smith said he doesn’t believe giving general areas is part of HIPAA laws because “it has to do with individual addresses and the person.”

Davis said, “I do suspect that part of it is even if they don’t reveal the person’s name or address, that when you start revealing that kind of information it becomes pretty easy in smaller communities or neighborhoods to identify a person. It’s one of those things even if they’re not revealing specific pieces of information from the different kinds of points, it maybe would reveal or show who that person is.”

Said Davis: “I’m also under the impression that when someone does test positive, my understanding there is an attempt to contact the individuals that they’ve come in contact with to try to track down if there’s anymore spread or let to people know that it might be a good idea to kind of keep watch on things. That’s my sense of things. Again, I would defer to the health department on that.”

Scherer told Smith that the Senate passed a $480 billion relief bill for small businesses. “So maybe the next round of relief funding will help some of our local businesses this time.”