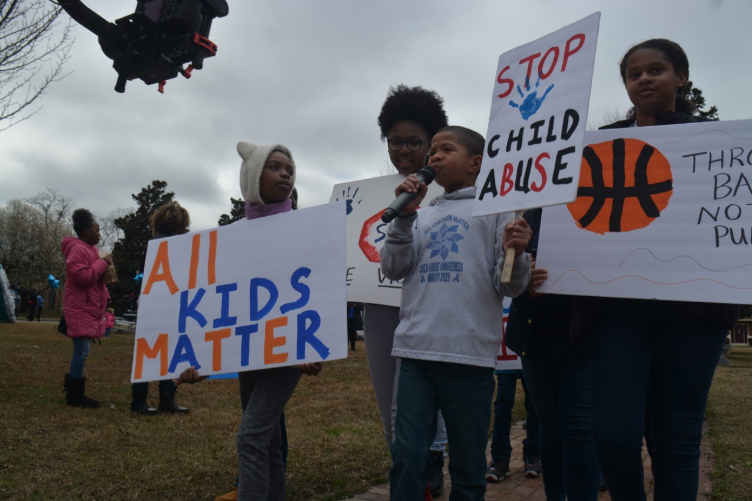 Since his first march to raise awareness of child abuse, a broader world has opened for Elijah Lee.

The KIPP Gaston College Preparatory sixth-grader has been honored by Halifax Community College as an African-American hero, has appeared on the Kelly Clarkson show twice and was featured as a Marvel Comics character through its heroes project.

The third annual march will be Saturday from 1 p.m. to 2 p.m. at Centennial Park in Roanoke Rapids and Lee has speakers planned, including one who has decided to speak about her experiences with child abuse.

One of the speakers will be Captain Chuck Hasty of the Enfield Police Department, who when he was police chief in Roanoke Rapids, guided Lee through the permitting process for his first march.

“He’s found something he wants to stand up for and try to effect a change,” Hasty said this morning. “My relationship with him has developed as a friendship and he’s actually been a mentor to me. Hopefully, I can be one to him.”

Police work, Hasty said, is about building relationships, developing a bond between law enforcement and youth “to make things better for the community.”

For Lee, the support of people like Hasty and the overall community is appreciated.

“For me, the support really means a lot,” he said. “I understand that I am a child and a lot of people believe that I shouldn't be doing the work that I do. To have support from my school, family, and community shows that we are all ready to pass the torch of justice on to our younger generations. It means a lot to know that there are people behind you and ready to back you up if you need them. I am extremely appreciative of the sacrifices that my family especially makes to support me.”

The march Saturday will begin with a brief welcome and then a 15-minute march.

Following the march the participants will gather around the gazebo for the speakers.

There will be a welcome from the city, an address by Hasty, a young person who will tell their story, Tammi Sutton of KIPP ENC, Senator Erica Smith and Lee.  “Before we leave for the day we will march three final laps for those children who died due to child abuse. I'm not exactly sure what the message will be on Saturday, but I do know that I will be emphasizing the importance of keeping our children safe and hearing their voices.”

Lee is honored to have appeared before a national audience — the Clarkson show and the Marvel project. “This recognition shows that as a nation and as a community we are ready to hear the voice of our young people. It shows that our young people will no longer be silenced. It shows how our young people have power and child abuse must stop. I am also very grateful that the topic of child abuse is being talked about. We know that if you talk about a situation change will come.”
The Marvel Project accolade and its accompanying documentary on Disney + has also been rewarding. “I had the amazing opportunity to meet the executive producer for the show, Maura Mandt. I also had an amazing director, Stephanie Ridenour, and crew for my episode. The whole experience left an indelible mark on my life that I will never forget it. It is my honor to be in such a group of teenagers who are using their voices to make an impact on our world. Also, I want to thank the great Stan Lee who made a universe based on real life heroes and turned them into fictional characters.”

Then there are the messages he has received since starting the march. “I have received a number of messages, texts, and emails from individuals sharing their personal stories of abuse. I am grateful that they trust me with this and I'm also proud to know that we are speaking up for those who have felt voiceless. My friend will be speaking at the march on Saturday and sharing her story and I could not be more proud of her courage. When people bring their story to me I let them know how thankful I am that they are willing to share and I let them know how proud I am of their courage.”

What the future holds for Lee is still a tough question to answer, he said. “What I would like to do is grow up and become a prosecutor to protect and help children in the courtrooms, along with pursuing my calling from God in my ministry. I also find it important that no matter what your job is that you continue to be an advocate for whatever you believe in and that is what I plan to do.”

From starting the process for the first march until he now, he said, has been a roller coaster of emotions. “When I first started marching and getting my permits I was a little intimidated by the system and knowing how everything works. But now I understand the importance of using my voice and I am a lot more confident. My advocacy has made me more focused on taking my ideas of change for our young people to legislation. I am grateful to God for my opportunities and accomplishments.”