Jones gets 16 years for crime spree after prison escape

Cul Priest Jones, who after his escape from a Hoke County correctional facility in 2018 went on a crime spree in Halifax and Northampton counties, was sentenced following a plea agreement to 16 years in prison today. 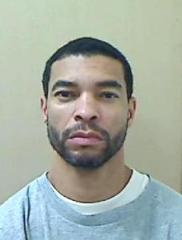 The sentencing by Superior Court Judge Alma Hinton for the 16 break-ins, four second-degree burglaries and one count of larceny of a firearm won’t begin until the expiration of his current sentence, which is set to be completed in December of 2025.

Barring any infractions, the sentence today means the 46-year-old Jones wouldn’t be released from prison until he is 67, his attorney, Geoffrey Davis, said.

Assistant District Attorney Kanter S. Morris told the court the seven-month crime spree while he was on the lam represents 21 victims and some $85,000 in damages and stolen items in which he is expected to pay restitution.

Davis told the court his client was getting the maximum sentence on each of the crimes the plea deal represents.

The crimes also represent those he committed in Northampton County, Morris told the court. Those charges, which occurred in the Lake Gaston area, were transferred to Halifax County for disposition.

The crime spree ended in April of last year following his arrest in the area of Roanoke Rapids commonly called the Lincoln Heights community. Morris said his arrest was the result of an intensive manhunt between the Halifax County Sheriff’s Office and Roanoke Rapids Police Department.

His Hoke County escape came after his conviction in 2014 to a term of 7 years and 11 months for first-degree burglary, which was related to a December 2013 crime in which he was shot by a business owner who was awakened by noise and saw Jones behind the cash register with a handgun.

Jones would go to Maryland when he was not in Halifax County during his time on the run, Morris said.

Davis said the plea deal came after negotiations with the state, Jones and his family. “Some of these cases are better than the others.”

Jones is currently being housed in Raleigh’s Central Prison, according to state Department of Public Safety records, and Davis said because of the escape he has been in what has traditionally been called solitary confinement.

Jones has been in some type of custody since he was 15, Davis said, asking the court to allow his client to serve the time bartered under the plea deal with the sentence he is currently serving. “He’s only had nine months where he hasn’t been in some form of custody.”

Morris, however, asked for the 16-year sentence to run at the expiration of the one in which he is currently serving. “I feel like anything else is rewarding him for his bad behavior. I don’t think he should get a reward for escaping.”

Hinton agreed and ordered his sentence for the crime spree to start at the expiration of his current sentence.

The judge also praised the defense and the state for working together on the matter saying both sides were “very pragmatic.”

Morris said afterward, “Sometimes we balance justice and judicial economy to resolve these cases to ensure the victims are represented adequately and justice is served.”

Said Davis: “I think this is a product of lengthy negotiations. We could have easily used every trial session for the next three years and still not have finished them. Even in the best case, he will be 67 when he’s released.”