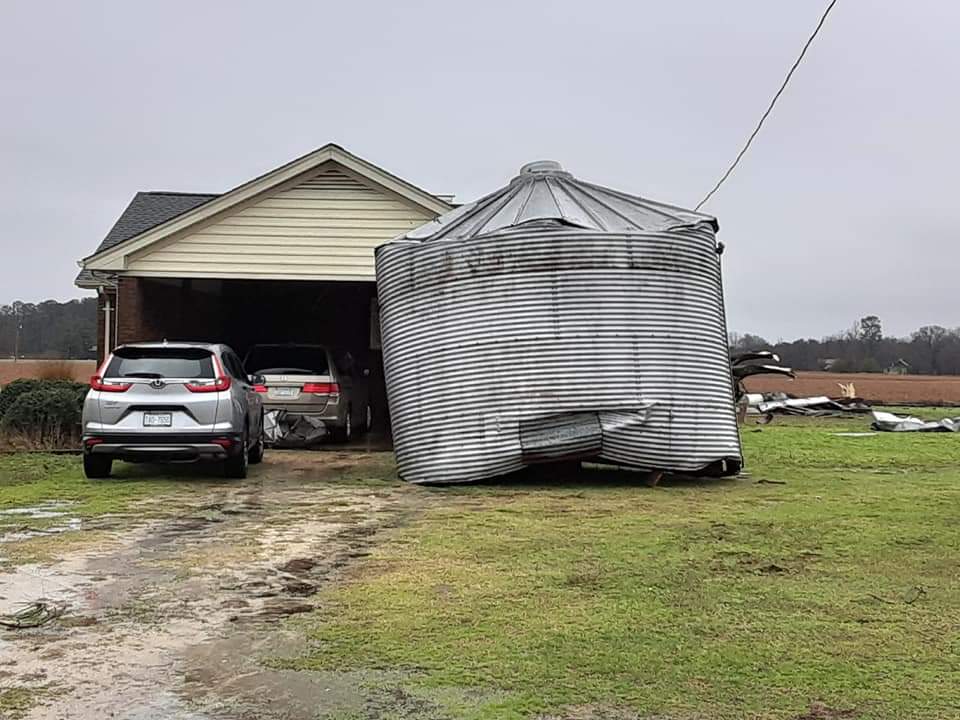 Scotland Neck fire Chief Deborah Hopkins and Halifax County Emergency Management Coordinator Buddy Wrenn both said they were waiting on word from the National Weather Service whether the damages were caused by straight line winds or a tornado.

Hopkins said flying debris damaged a vehicle as the storm came through the area around 3:15 p.m.

“The damage was significant in that area,” Wrenn said this morning.

The storm was centralized in the area of Highway 125 and Green Star Road and damages extended east and west from there. “I’d estimate almost 2 miles of houses were damaged.”

Wrenn said in that area there were at least seven houses damaged, three barns that were severely damaged or destroyed and at least six grain silos destroyed.

A tree fell on a house off Highway 301 south of Enfield. Wrenn said a camper was flipped over and destroyed. The occupant of the camper received hospital treatment.

The National Weather Service in Raleigh said in an update issued shortly before 5 this morning, winds will become southwesterly and increase to between 15 and 30 miles per hour with frequent gusts between 35 and 45 miles per hour.

Infrequent gusts in excess of 50 miles per hour will be possible, especially across the Sandhills and Coastal Plain, from Laurinburg to Fayetteville to Goldsboro and Rocky Mount.

The strongest winds were expected to occur between 6 or 7 this morning and around noon or 1 p.m.

The NWS said significant tree damage, including falling limbs and branches and scattered to numerous uprooted trees, will result, as will numerous power outages. “Given that this is expected to be an unusually strong wind event, and soil is saturated from multiple inches of soaking rain during the past 48 hours, scattered to numerous uprooted trees may result. Travel and outdoor activities are strongly discouraged this morning due to the strong wind gusts and increased risk of tree damage.”

Wrenn said there has been no significant flooding thus far. Most gages Wrenn has observed recorded between 3 to 3 ½ inches of rain.

Wrenn said he has observed most of the damages throughout the county and will submit the reports to the state.

He doesn’t believe, however, there was enough damage in the county to pursue an emergency declaration.