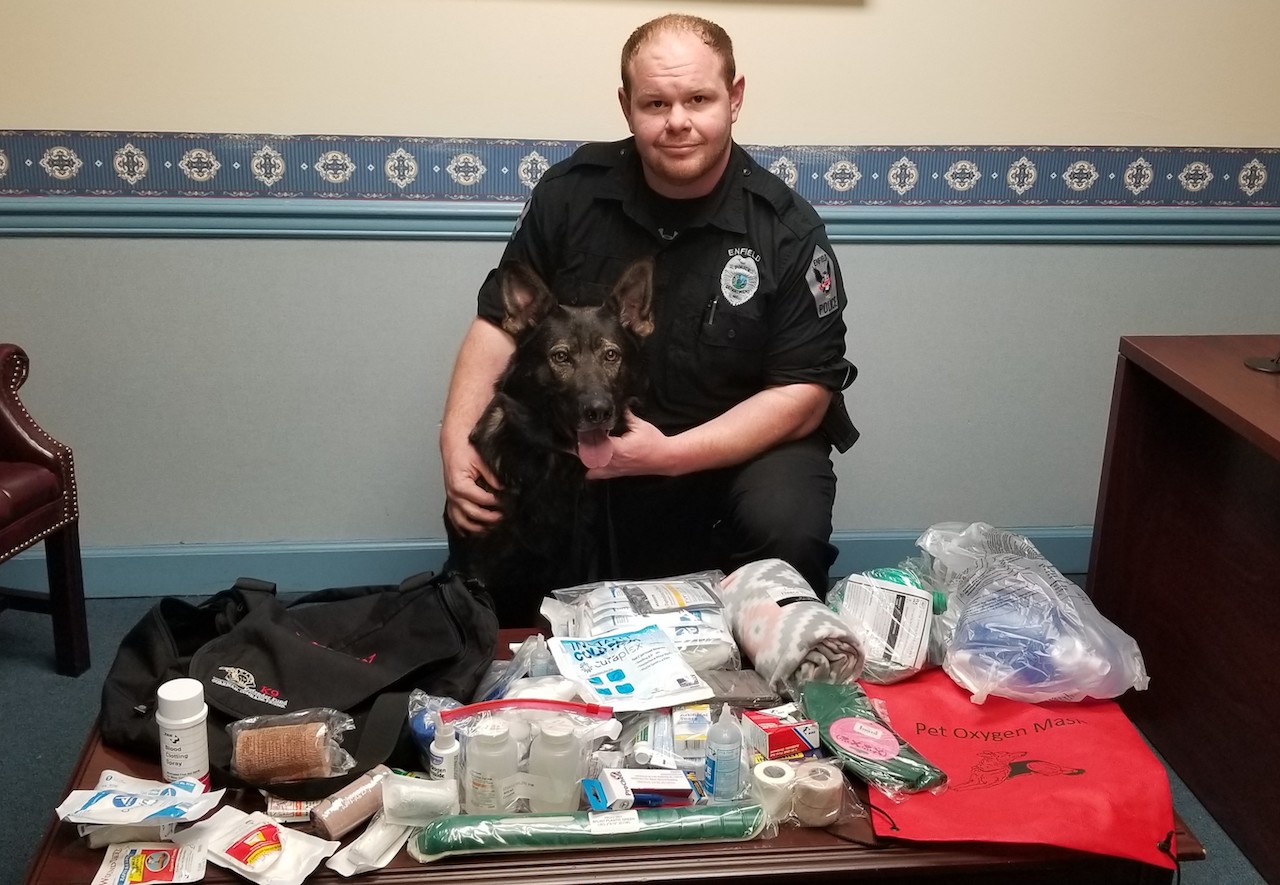 Enfield gets Buddy Bag for Blitz

Enfield police Officer Timothy Worrell applied for and was awarded a grant from the K9 Defender Fund for the department’s dog Blitz.

K9 Defender donated the Bag Buddy, which officers can use to provide lifesaving first aid to their dogs in a time of need, Chief Tyree Davis said. “Since canine handlers are often the first to act as first responder for their partners, time, along with having first aid supplies on hand is critical.”

The Buddy Bags main feature is a specialized breathing apparatus that is formed to fit any dog’s muzzle. The specialized cone-shaped oxygen mask allows for a secure fit on the dog’s face. Many animals receive burns through the course of an explosion, fire or accident. Therefore, specialized burn sheets, bandages, rinsing saline and protective restraints are also included in the bag.

“The Enfield Police Department along with canine Blitz would like to thank K9 Defender Fund for their donation,” Davis said.

In other department news, Davis was voted the 2019 Community Officer of the Year.

In December the police department asked people to vote on the community officer of the year award. “We opened the vote up to people in different cities and counties. We opened it up to multiple areas because as law enforcement officers we not only serve our citizens but also people that pass through our city or people in other cities that we may help while working special events in their city,” Davis said.

Said Davis: “I would like to thank the community for voting for me again this year. I enjoy helping people, especially the kids. I enjoy organizing or going out to different community events no matter where the event is held.

“Winning this award means so much to me because it comes as a result of only votes from the community and the citizens. I appreciate this because I’ll be the first to admit that we have some bad law enforcement officers but most of us are good. I’ve seen that a lot of times the media only shows the bad. Therefore, anytime I can go out and show officers in a positive light I try to take advantage of that.

“I tell people all the time, our department will give you tickets. We will lock you up. But, we will also help you if you are in a time of need. I will do all that I can to help the community and receiving this award from them lets me know that they appreciate what I’m doing. Building relationships is what it’s all about. Allowing the citizens to vote is another way to have positive interaction between law enforcement and the community. At Enfield Police Department we are not just police officers, We are our community.”

This is the second year in a row that Chief Davis has won this award.

Lieutenant Willie Murphy Jr. was voted the 2019 Officer of the year for the Enfield Police Department.

The department asked its staff to anonymously submit their vote for officer of the year to Administrative Assistant Samantha Thorpe.

“This shows the amount of respect that I have not only from the officers I supervise but from my supervisors as well,” Murphy said. “Like other officers I work a lot of days and rearrange my schedule to ensure that shifts are covered when scheduling conflicts and other personal reasons arise for the staff. Even though I’m told daily and I know the department appreciates me, winning this award is truly a humbling experience.”

This is the second year in a row Murphy has won this award.