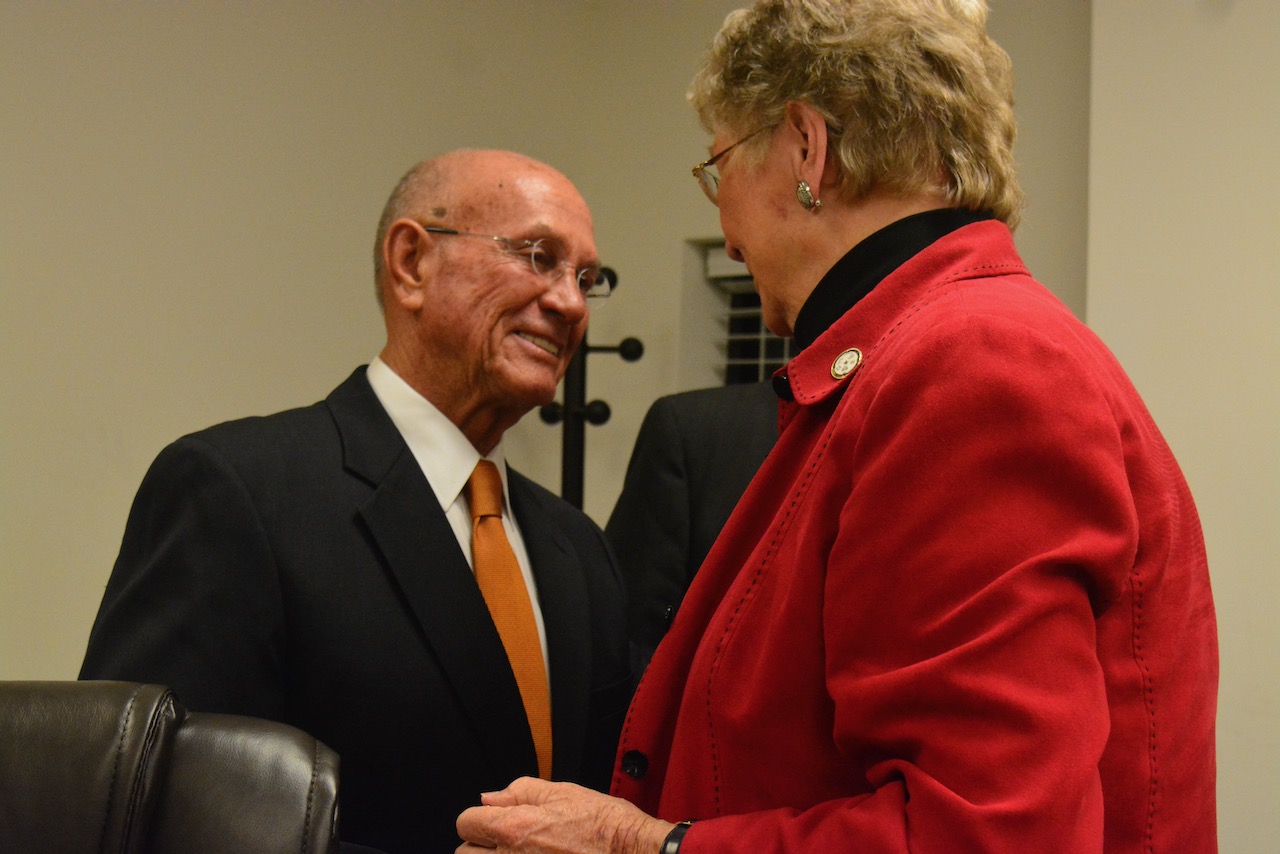 While the longtime local attorney is not retiring from his established law practice, he did decide to step down as the city’s legal representative.

Chichester said following Tuesday’s meeting he feels he has accomplished his goal of leading an effort to restructure the city’s theater debt. “The city was in a quagmire with the theater. That’s why I stepped in to get the city through that. That was important to me. I believe the city has a very bright future.”

Chichester was lauded throughout the meeting and department heads, some council members and the attorney himself could be seen dabbing their eyes.

Of the accolades given him, the attorney said, “Representing a city of 16,000 to 17,000 people is one of the highlights of my career.”

Chichester said during the meeting the city will receive capable legal representation as his law partner, Geoffrey Davis, takes over the position. “I believe Mr. Davis will do a great job,” he said.

In the memo contained in the council agenda packet concerning Chichester’s resignation and the hiring of Davis, City Manager Joseph Scherer wrote, “I find Mr. Davis to be knowledgeable and experienced in municipal affairs.”

Davis is currently the town attorney for Gaston and Scherer noted in the memo, “He is prepared to represent the city in all civil proceedings, litigation, real estate matters and land use and zoning issues.”

Chichester will be available to consult with Davis “to provide professional guidance along with insight and historical information regarding previous city legal matters.”

In his December 2 resignation letter to Scherer, Chichester, who has more than 40 years of legal experience in state, commonwealth and federal courts, wrote, “I have been blessed to represent thousands of clients that have included public boards, corporations and individuals. I can truly say that representing the city of Roanoke Rapids and its citizens has been one of the high points of my legal career.”

Wrote the attorney, “Working with Mayor (Emery) Doughtie, Mayor Pro Tem (Carl) Ferebee, council members (Ernest) Bobbitt, (Suetta) Scarbrough, (Wayne) Smith, (Sandra) Bryant, the late Carol Cowen and you as the city manager has been a sincere pleasure and very rewarding. The trust and confidence that we shared helped me to perform my duties to the best of my ability. I continue to believe that Roanoke Rapids has a very bright future.”

Davis has lived in Roanoke Rapids since 1993 and is coming up on his tenth year of working with Chichester at the end of the month. “I think back on my career and there was nothing better for me than to work with him. I see the amount of work it requires. I look forward to getting to know everybody better.”

Doughtie said Chichester was always available to answer questions. “He didn’t act like I was bothering him or annoying him. This council has always been accepting to work with people. I admire and respect the city attorney taking this bold step and taking on a new challenge in his life.”

In his regular city manager’s report, Scherer, of Chichester, said, “His performance as city attorney for the past 11 years has been absolutely outstanding.”

Scherer said “the technical skills and sound legal practices he displayed in planning, coordinating and implementing the diverse requirements of the city’s legal affairs program provided commendable results in many complex situations. He has, without question, gained the respect and confidence of all the city’s officials for his depth of knowledge, sound judgment and high ethical principles.”

Said Scherer: “Gilbert, we cannot thank you enough for your assistance. Your legal expertise and professionalism went above and beyond my experience with previous city attorneys and we are all grateful for your integrity and all the hard work you did on the city’s behalf. We will always be appreciative of all your efforts.”