A Greensboro man was found in possession of edible marijuana treats last week and charged on associated counts.

The arrest of Albert Donald, 19, came shortly after 2 p.m. on December 5 when PACE team officers B. Council and J. DeSare were investigating a vehicle for displaying expired tags.

The officers became more suspicious when the other occupants were hesitant to give their information to them.

Sergeant R. Cross and his dog, Midas, assisted and the canine alerted to the presence of narcotics in the vehicle. 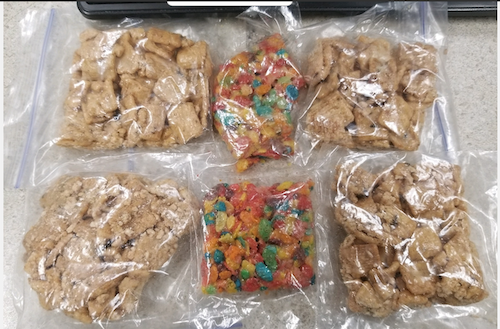 Martin said the snacks were cereal based — Fruity Pebbles and Cinnamon Toast Crunch.

Donald was arrested and charged with possession with intent to sell and deliver marijuana, felony possession of marijuana and maintain a dwelling/vehicle for controlled substance. He has a February 5 court date.

A second person — Katrell Miles, 19, from the Greensboro area — was arrested for an outstanding warrant for littering. She has a January 15 court date.

Martin said the investigation stemmed from a vehicle blocking the driveway area of a local business.

Citizens are encouraged to call the police department at 252-533-2810 if they suspect drug activity. “All calls received will be followed up on as we continue to battle the illegal drugs being sold and used in the city of Roanoke Rapids.”