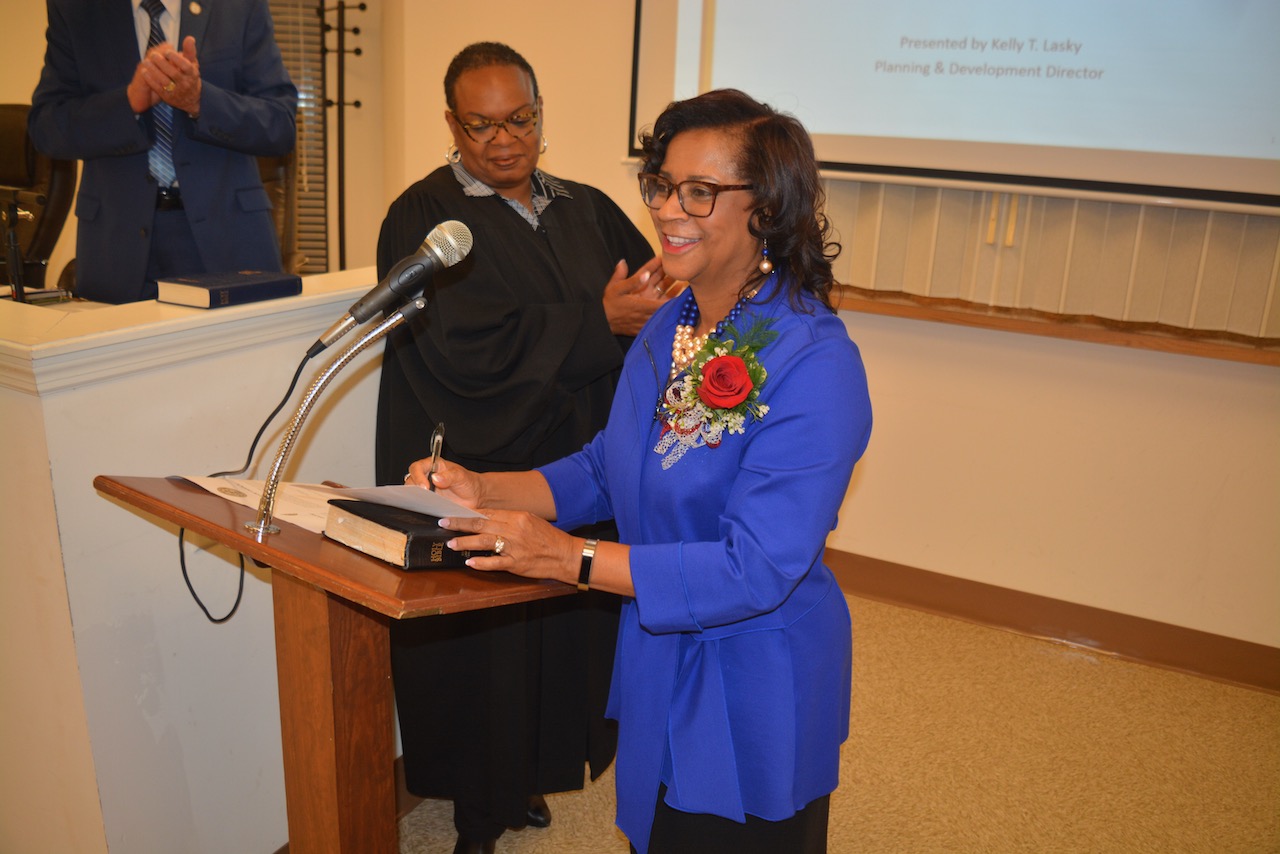 Bryant sworn in as first woman of color on city council

Sandra Bryant took the oath of office Tuesday night to become the first woman of color to serve on Roanoke Rapids City Council.

She ran unopposed last month for the District 2 council seat left vacant by the death of Carol Cowen.

With her family by her side, Bryant was administered the oath of office by Senior Resident Superior Court Judge Alma L. Hinton.

Following the meeting, Bryant said, “I really feel very honored to be elected and being able to serve in this capacity. I don’t take it lightly. I feel that being a woman, a woman of color, a woman that has grown up in this area for over 50 years, I’ve seen lots of changes, many improvements, but I also see some things we can still do better and I’d like to be a catalyst in helping to do something to bring those changes.”

Bryant said she would like to see more citizen involvement “involving all of our people, trying to get more people involved in the things we have going on. I’m just amazed and happy we do have parks, we have the recreation centers for our youth, but not all of them feel they can participate. I’m thrilled about the new senior citizen housing that has just opened.

“I care about our senior citizens that they have somewhere that is safe where they can get the basic needs. I just want to see everybody working together.”

Asked what it means to her to be the first woman of color to serve on council, Bryant said, “When it was first brought to my attention I thought about it and I was like, ‘wow, I guess I will be the first.’ I think it’s a pretty big deal, but when I pursued it I wasn’t even thinking I was going after it because of that. I just was interested as a citizen, as a mom, someone that has been here but I think it’s time. I mean it’s 2019 and I think it shows progress.”

Bryant said she is excited about the opportunity to serve on council. “It wasn’t based on my race. I feel overwhelmed with the support that I have received.”

She meets regularly with a group of women who talk about things they would like to see done. “We don’t look at color. We’re looking at what can be done to help improve our city, to bring in more business, things that we can do to make our young people stay or when they go off to college they feel they have something to come back to.”

One of the people who stood with her during the oath was her mother, Arizona Putney. “She’s always been a trailblazer,” Bryant said. “That’s why I asked her to come and stand with me. My mom raised six children. My stepfather died 40 years ago and at that time there were three children still at home.