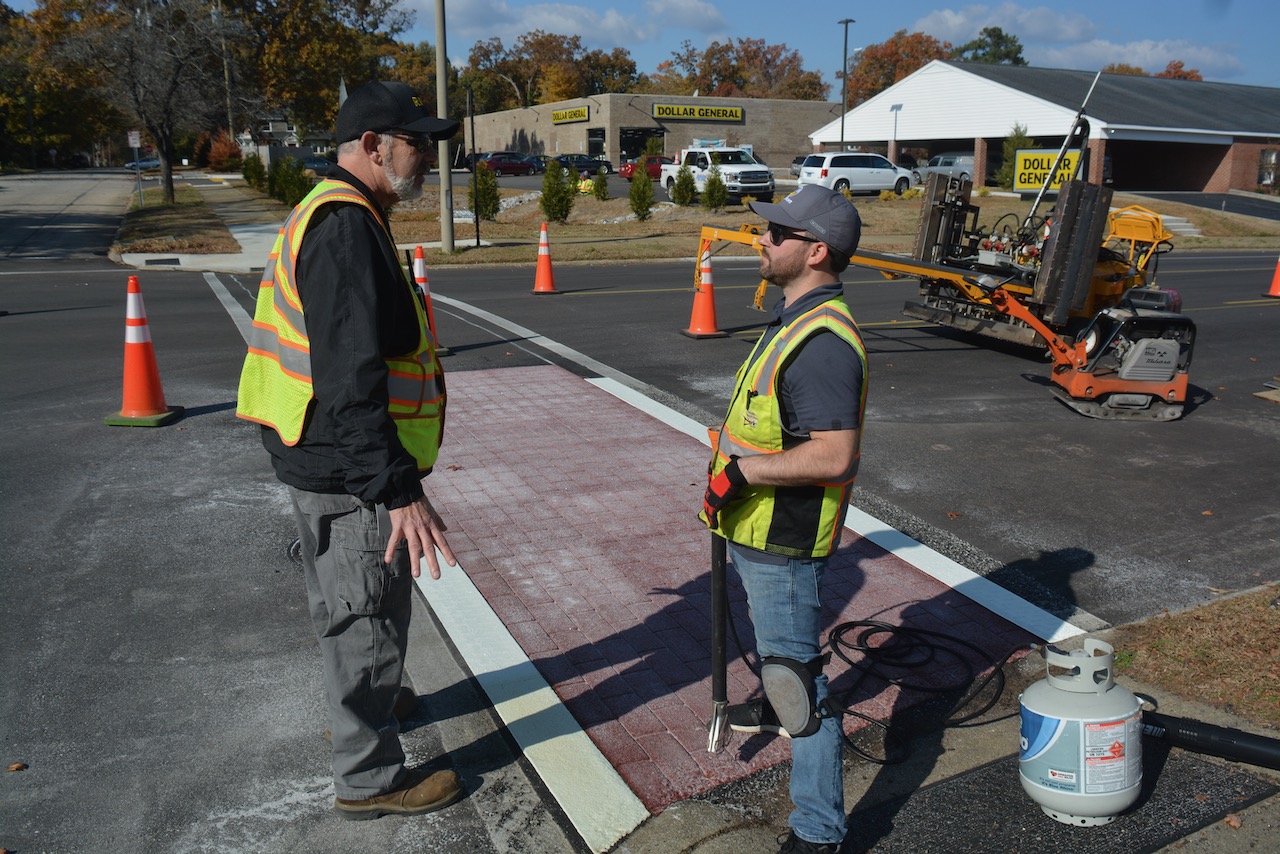 New decorative crosswalks are being installed at the intersection of Roanoke Avenue and Eighth Street at no cost to the state Department of Transportation.

The work was expected to be completed by the end of the day.

Ennis-Flint, a Greensboro company specializing in pavement marking and traffic safety products, is doing the work.

“It’s quite a big investment but the payoff is a city is safer and it’s a way to set a city apart,” said Mark Kennedy, chief commercial officer for the company.

Kennedy was among several officials with the company today in Roanoke Rapids to observe the demonstration installation along with state and two city department heads.

Kennedy estimated the company has installed tens of thousands of these crosswalks across the country. “We’ve been in this over a decade and if it was under tens of thousands, we’d be shocked.”

The crosswalks are a part of a movement among communities designed to customize the character of their municipalities, Kennedy said.

The designs go beyond the brick look which is being done in Roanoke Rapids.

In Nashville, Tennessee, crosswalks are under development which will have music notes and guitars while in Seattle the crosswalks have a funkier, cosmic look. “When they have the opportunity to build the character they want, it really becomes part of the character of the city,” Kennedy said.

But there is a function to these crosswalks beyond decoration. They are designed to improve traffic safety, especially at intersections and multi-use paths and the preformed thermoplastic used in the process enhances visibility.

Communities are also using the decorative crossings in their revitalization projects like Roanoke Rapids is doing. The two new crosswalks at Roanoke Avenue and Eighth Street make a total of four in the city with one between 1026 Roanoke Avenue and the arts council building and the other at the entrance to the Canal Trail near WestRock.

Using corundum in the brick-like crosswalk makes the walkway skid and slip-resistant, Kennedy said. “Corundum is almost as hard as diamonds.”

The reflective bars which cordone the decorative portion of the crosswalks contain reflective beads which aid in nighttime and daytime visibility.

Kennedy also explained the reflective white bars are designed to lift snow plows up so the crosswalk is not marred. “We try to roll the edges to build it into a ramp. It tends to not jar the markings as much. Whether decorative or regulatory we always roll the edges on the abuse side of markings. If the bar comes up it can be repaired by custom cutting a new piece. It’s very easy to fix.”

The material used in the crosswalks is extremely durable, the company says on its website and the sheets used are 150 mil thick. The preformed sheets are positioned, heated and then stamped into the asphalt.

“I think it’s excellent,” said Roanoke Rapids Main Street Director Christina Caudle, who watched the process this morning. “This type of enhanced crosswalk is proven to slow vehicular traffic. Better visibility allows pedestrians to cross easier. There is a function and purpose.”

Caudle said there are case studies which show “this type of streetscape is an important tool to increasing retail sales.”

Roanoke Rapids Public Works Director Larry Chalker said the crosswalks will be “much more visible than anything we’ve had here. We’re lucky to have this vendor do this so we don’t have to fork out thousands of dollars.”

While the crosswalks help dress up a community and set it apart, he said, “It’s not just about looks — it’s about safety.”