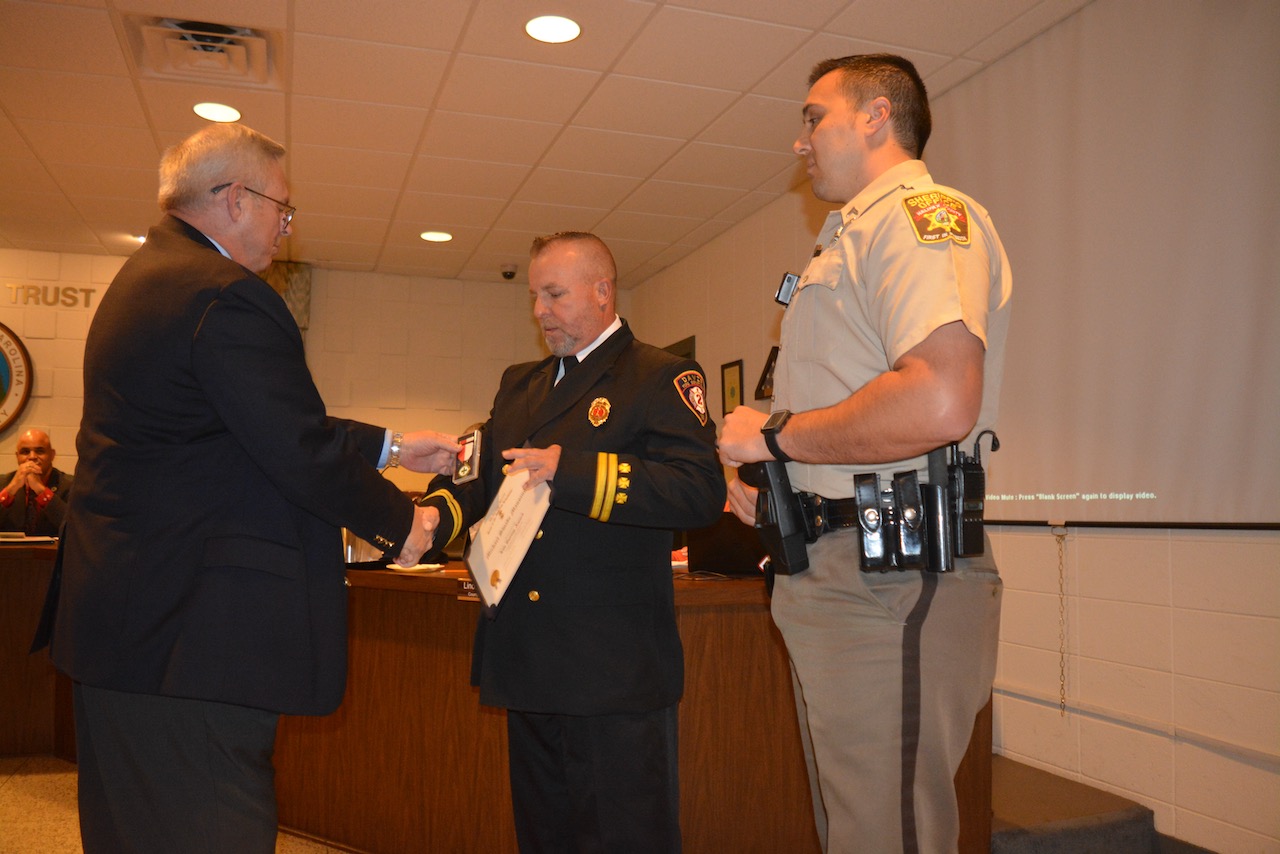 The lifesaving efforts of a Davie volunteer firefighter and a Halifax County Sheriff’s Office deputy were recognized at Monday night’s board of commissioners meeting.

Ken Wilson of the Halifax Resolves Chapter of the Sons of the American Revolution presented the organization’s lifesaving medal to Lieutenant Mike Manning of the fire department and Corporal Jake Pignanello of the sheriff’s office.

The awards were for the rescue of a woman from a burning house on Wendover Lane in August, Wilson said.

He told commissioners the early morning fire occurred August 12. “Corporal Pignanello and members of the fire department responded to the area and were able to locate the residence, which was engulfed with flames.”

The corporal spoke with two residents who already escaped the home and learned there was another woman still asleep inside the burning residence. “Proceeding to the back of the residence, Corporal Pignanello and … Lieutenant Mike Manning located the window of the bedroom where the female resident was sleeping,” Wilson said. “Corporal Pignanello was able to see inside the burning home and witnessed the female choking on smoke and appeared to be disoriented.”

As Manning penetrated the thick hedge under the window, Pignanello found a bicycle pump in the yard and threw it through the window. “This allowed the victim to exit through the window to safety assisted by Lieutenant Manning,” Wilson told the board. “The victim received medical treatment on scene and was transported to a local hospital to seek further treatment for smoke inhalation.

“Without a doubt, the actions of Corporal Pignanello and Lieutenant Manning saved this resident’s life. Tonight, the Halifax Resolves Chapter North Carolina Sons of the American Revolution wish to recognize these two dedicated public servants and their efforts to keep our residents safe.”

Sheriff Wes Tripp told the board, “Words can’t even describe how proud we are. The fire service is our brothers in red. They are volunteers. That makes it even more tremendous. We have a great working relationship with our county fire departments. They are our first line of defense. I commend both for their service and a job well done.”

Pignanello thanked Wilson and the board. “Anyone of us would have done the same."