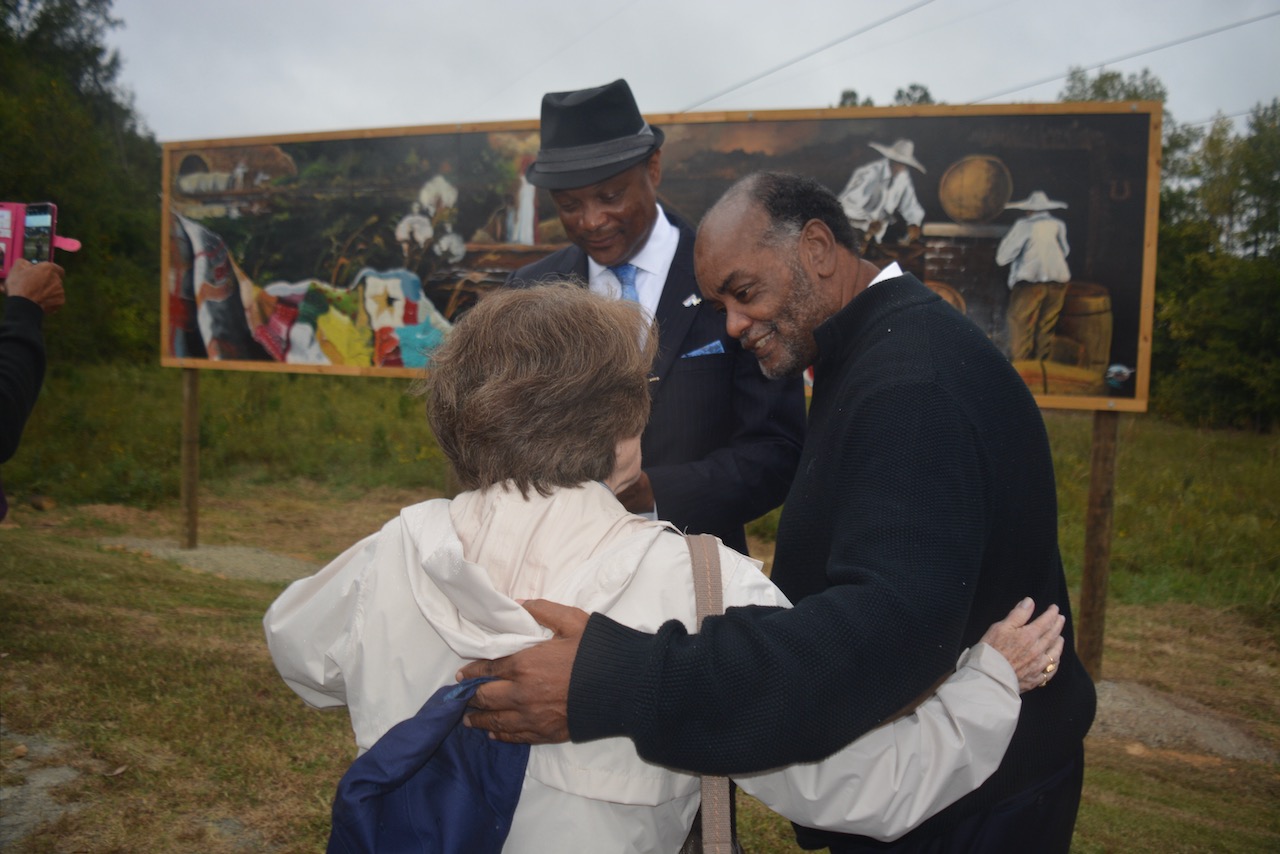 Napolean Hill choked back tears as he discussed his latest mural — one located at the Roanoke Canal Museum which recognizes freedom seekers who used the canal to escape.

“The most important thing is the quilt,” he said. “It has so much meaning to it. It means so much to me. The quilt is something we all recognize. Every house has a quilt. This is one of my favorites.”

In a previous interview about the mural, Hill said the quilt represents mothers who held families together.

Tuesday evening the mural was dedicated and several speakers told how much they appreciated the artist’s work.

“This mural has important cultural significance and expresses the historical context of fine art character in a deep way which words cannot describe,” Weldon Mayor Julia Meacham said. “It speaks to us of the Roanoke Canal — created in the early 1800s — serving as a passage away from the dangerous rocks and rapids of the Roanoke River, stimulating a large amount of trade to this area.”

Meacham explained nearly 200 years ago an aqueduct was built over Chockoyotte Creek as part of the Roanoke Navigation system. “It stands as a reminder of a major engineering feat in North Carolina.”

The mayor called for those attending to “reflect and remember the Underground Railroad was comprised of people bound by a basic belief of freedom and dignity for all. Now, in the 21st Century, the Roanoke Canal Museum offers the public a museum, the Roanoke Canal Trail and a remarkable mural that depicts an earlier era that brought great prosperity and growth to Roanoke Rapids and Weldon.”

She thanked Hill “for preserving our rich heritage through your beautiful rendering of this mural.”

State Representative Michael Wray said the mural “tells the history of the past and present. It shows us what a great community is about and what the state of North Carolina is about.”

Halifax County Board of Commissioners Chairman Vernon Bryant said, “When you look at the quilts, you think about mamma.”

Bryant thanked Hill. “God has been good to us, giving us someone of this talent.”

Pat Barnes, president of the Halifax County Arts Council, which commissioned Hill through a grant, said the mural is the tenth in a series celebrating the county’s history. “It defines the essence of each community.”

She recognized the Roanoke Canal Commission, Friends of the Canal, Tommy Daughtry of Dominion and Ryan Newsome, cultural resources leader of the Canal Museum.

“There was a lot of work in it,” said Newsome. “Napolean, you did a great job. I thank Dominion, Tommy Daughtry who we put through a lot of hard work, the arts council, Friends of the Canal and the canal commission.”