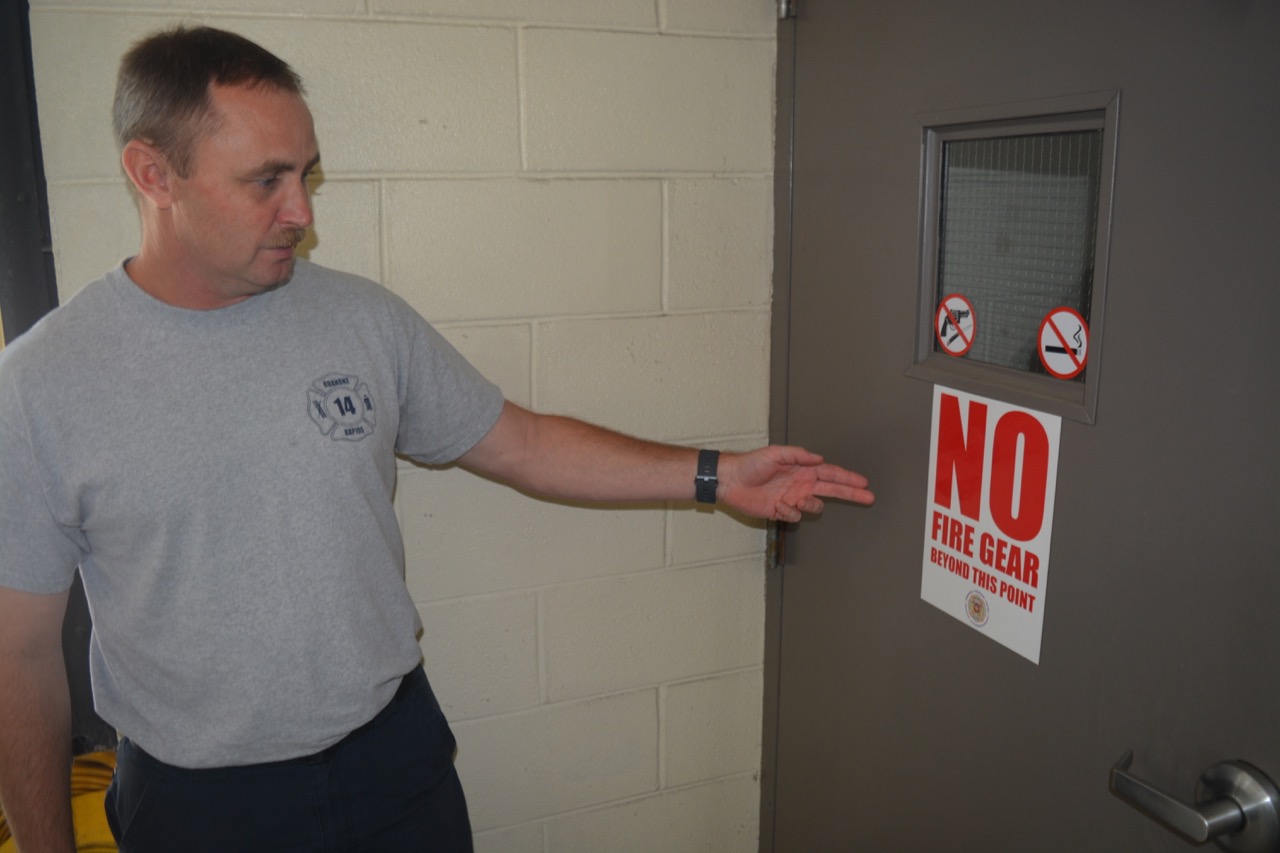 Dirty turnout gear was once a badge of honor for firefighters.

As research advances, however, the soot collected on gear from fire scenes has been linked to cancer, Roanoke Rapids firefighters said today.

“Dirty gear was a sign you were doing something,” Deputy Chief Wes Hux said. “We didn’t have a way to clean gear.”

Now there are signs posted inside the truck bays at both fire stations gear is not allowed inside the buildings or firefighter sleeping quarters, Chief Jason Patrick said.

(This link shows a video of the dangers turnout gear transfer. This link is a PDF of a test on how particulates gather on a firefighter's hood and skin)

Station 2 has a washer and dryer specifically designed for turnout gear and firefighters are expected to scrub down the outfits after a fire and load them on a pickup instead of getting inside an engine with them on.

“In the past they were kind of pulling them off at their bedrooms,” Patrick said. “Now you don’t bring it in the building. It stays in the truck bays. “We spray the airpacks and spray them at the scene. We put it on the pickup and (once back at the station) scrub it down and wash it good.”

Once the gear is scrubbed down itn is then taken to Station 2 to be put in the washer and dryer system there.

One of the latest items to help protect firefighters is the arrival of particulate-blocking hoods, which differ greatly from the old hoods they once wore.

The old hoods were the consistency of perhaps two socks sewn together, Patrick said, and were one size fits all.

The new hoods are custom fit for each firefighter and fit snugly around the face mask so no skin is exposed.

The arrival of the new hoods was through a fundraising effort by the Fireman’s Club and the city contributed the remaining funds so firefighters would have two each, said Patrick.

Compared to the old hoods, the new ones are expensive. The older ones cost  around $25 each while new ones can run between $90 to $130 apiece.

“We piggybacked our order with Davie (volunteer fire department) and got a better deal,” Hux said.

Patrick said, “In our efforts to save money, both departments worked together so they could get a better deal and to protect firefighters.”

Now the goal, said Patrick, is for firefighters to have two sets of turnout gear so one can be cleaned and dried and the other used. “We are working towards that goal of having a spare for each firefighter.

Cancer cases among firefighters began to spike in the 1980s, Patrick said. “Most don’t discover it until they retire,” although there have been cases of them finding out while still on the job.

The fire department began taking precautions about two years ago.

There were earlier safeguards put in the truck bays at both stations during construction with the installation of PlymoVents, which remove diesel soot from trucks.“We’re taking as many precautions as we can,” Patrick said.

Patrick said the precautions now go as far as keeping baby wipes on all fire apparatus. “Firefighters use them to wipe and clean their skin once coming out of a fire and their turnout gear. While it seems like a small gesture, it’s another way to help safeguard our firefighters.”