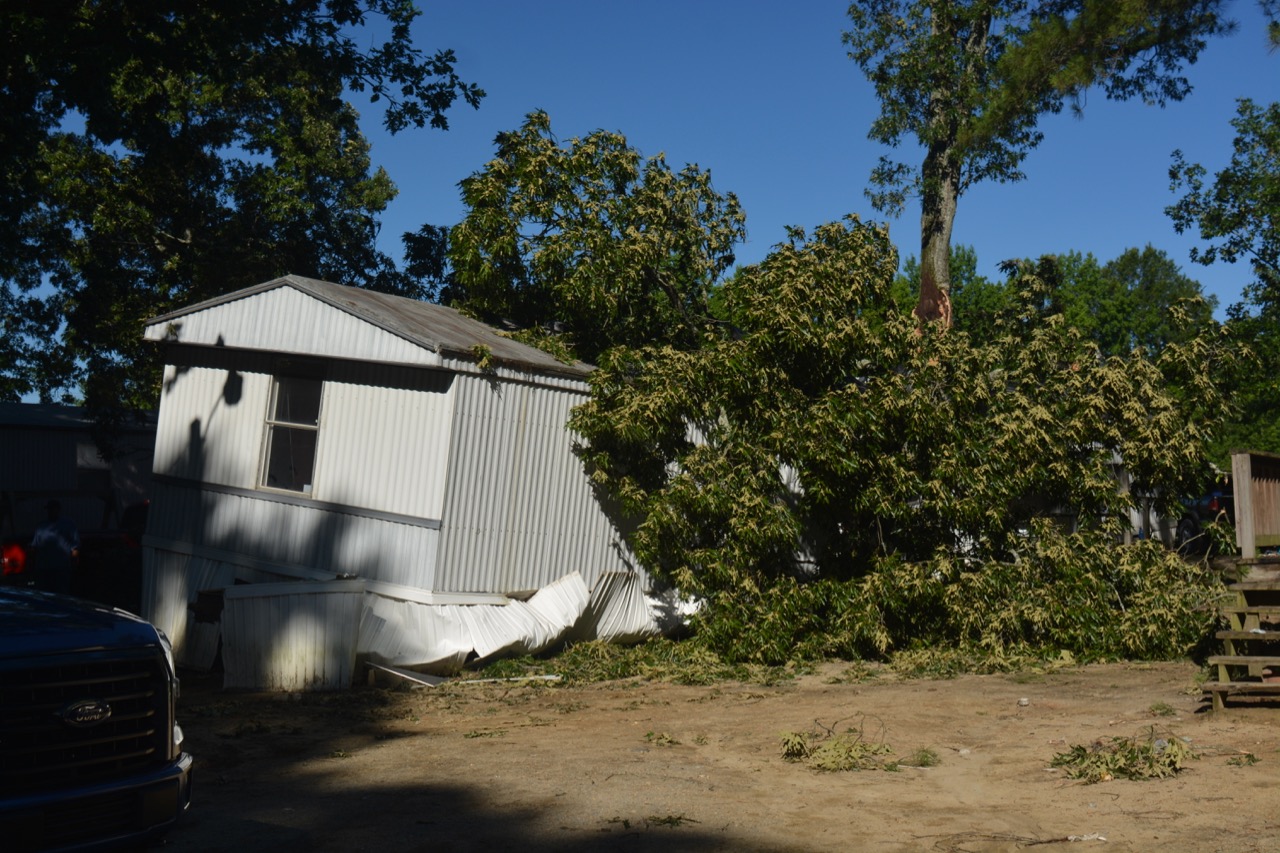 A tree fell through a mobile home while Roanoke Rapids city hall had an awning containing solar panels get blown off during a storm Thursday.

At Great Falls Circle off West Tenth Street Aleisha Pearcey and her mother Kathy Boseman surveyed the damage done to the mobile home Aleisha had lived in just a few months shy of 26 years.

“Everyone was working, praise God,” Aleisha said as a tow truck prepared to take her husband’s damaged pickup and her daughter’s damaged car away.

Aleisha said she and her family had weathered every storm at the home except one in the early 2000s.

The family was able to salvage clothes and photos from the mobile home where the tree forced it to lean to one side, making it unsteady. “We were very lucky that people in the community came to help.”

An insurance adjuster was scheduled to visit the family this morning.

Boseman said her family will stay with her.

Boseman said if her granddaughter hadn’t been working when the storm blew through around 4 p.m. she would have most likely been at home along with another family member. “They would have been at different ends of the trailer. It was meant for her to be working.”

At city hall on the side of Eleventh Street public works crews were cleaning up from where part of an awning was blown off.

Public works Director Larry Chalker said a “tremendous wind gust” hit part of the awning. “We’re taking it a section at a time to make sure it’s safe.”

Chalker said an insurance adjuster was coming to look at the damage.

The awnings have solar panels installed on top of them from the time city hall served as a regional hub for the former North Carolina Power, which is now the Dominion. The panels were installed in 1993 and were still feeding the power grid.

Murals done by high school art students were taken down as a precaution.

Elsewhere in the city several trees were knocked down.

As of this report there were still 159 Dominion customers without power in Halifax County and around 23 in Northampton County. Between Roanoke Electric and Halifax Electric, combined with Dominion customers, there were still some 200 people without power in Halifax County, said Buddy Wrenn, the county’s emergency management coordinator.

Wrenn said the Episcopal church in Halifax received roof damage while County Manager Tony Brown said some large limbs fell on a house a few blocks away from the church.

Wrenn said a power line was ripped from a house on Driftwood Lane and trees fell across Interstate 95 at the 160 mile marker.

There was a tree on a house off Piney Grove Church Road. “Numerous trees had fallen across the road. As far as I know a strong straight line wind progressed across the northern half of the state and went on to Bertie and Martin counties,” Wrenn said. “It impacted the whole northern quadrant.”

Chief Deputy Scott Hall of the Halifax County Sheriff’s Office said, “It came up fast. Houses were damaged by trees. What I saw was straight line winds. It almost blew my vehicle off the road.”

Hall said the sheriff’s office received reports from across the county — Littleton, Brinkleyville, the interstate, along Highway 48 and Weldon. “It was most of the county.”