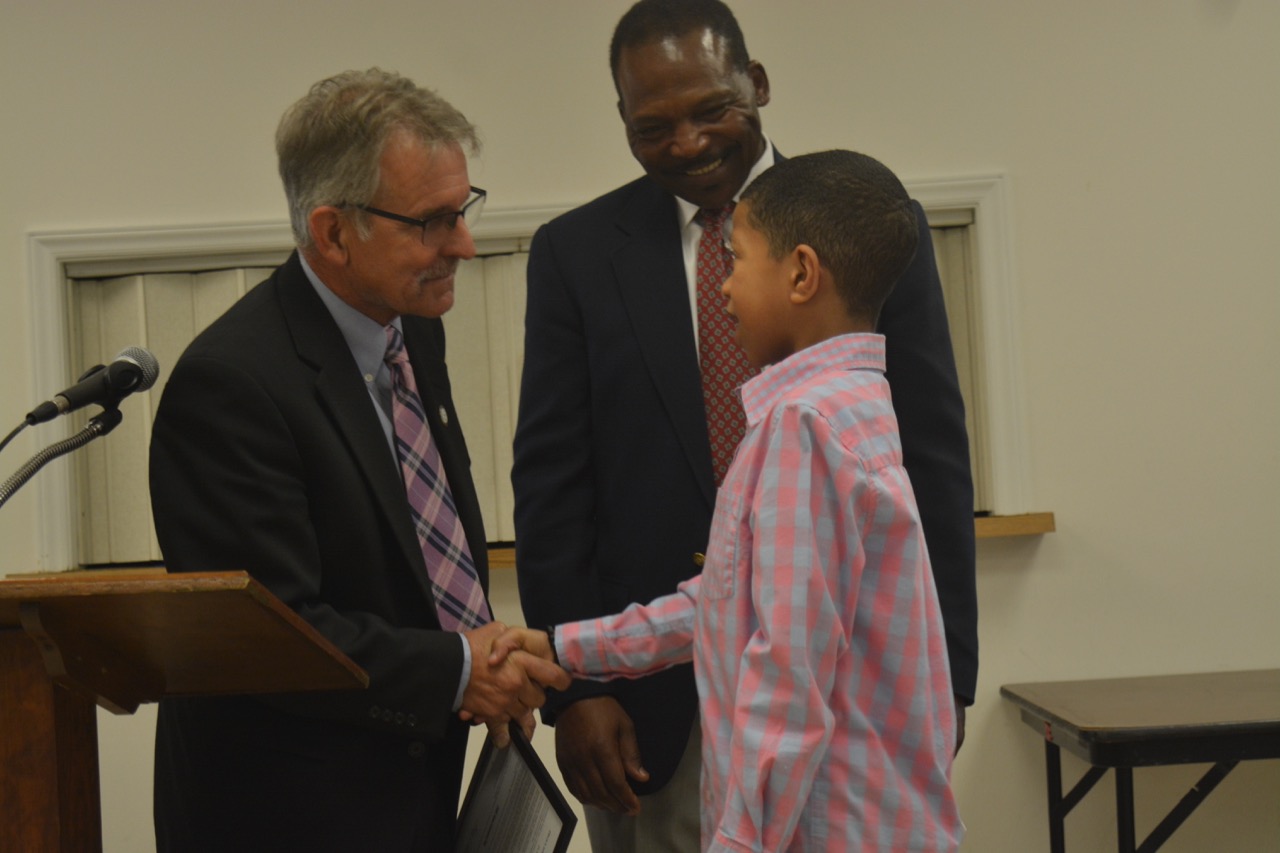 The C Shift members responded to an apartment complex where a 55-year-old man complained of chest pains and difficulty breathing.

Firefighters began to administer CPR as EMS administered medications. After around 30 minutes of work the patient regained a pulse and was transported to Halifax Regional before being transferred to another facility. The patient was later discharged and had a pacemaker installed. He has since recovered.

The chapter presented Officer Curtis Batchelor with the SAR Medal for Heroism after responding while off-duty following a wreck in Nash County.

The rescue occurred February 26 on Interstate 95 in Nash County as Batchelor, who was off-duty and headed back to Roanoke Rapids at the time, assisted along with others.

The crash occurred in a wooded area off the interstate north of Highway 64 near the Hunter Hill Road overpass.

Four people were injured after a vehicle struck a tractor-trailer.

“This is where Officer Batchelor and others sprang into action trying to help the family in the crash,” Wilson said. “Officer Batchelor and Chris Frisbee (a Greenville native) were able to get the two front passengers out of the vehicle before it was consumed by flames.”

Said Wilson: “The heroic actions of these two and others helped emergency responders get the victims to hospitals to care for injuries sustained in the crash. Officer Batchelor has maintained contact with the driver’s mother to monitor how the victims of the wreck are recovering. The Roanoke Rapids Police Department is proud of the actions of Officer Batchelor and others that stopped to render aid to this family … This is a great example of what officers do even when they are off and happen upon accidents or other events that they can assist in — they don’t think about themselves — they are thinking of the victims involved and want to help any way they can.”

It is presented to those who have served with distinction and devotion, Wilson said.

Norton, who began his career with the department on April 1, 1995, “has served the citizens of Roanoke Rapids for the last 24 years honorably, respectfully and selflessly. During his time he has trained many of our officers. His commitment to the department, to law enforcement and to the citizens of this community is to be commended.”

The child has held two straight child abuse awareness marches in the city.

The resolution describes the student as “an advocate and voice for children experiencing child abuse by bringing child abuse awareness to light in the city of Roanoke Rapids and surrounding community.”

Reads the document: “All children deserve to have safe, stable, nurturing homes and communities they need to foster their healthy growth and development … Trauma during childhood affects a person for the rest of their life and these affects can be mentally, physically and emotionally harmful.”

The document honors Lee, saying, “Elijah Lee believes when one of us falls we all fall and when one of us rises we all rise … The Roanoke Rapids City Council would like to pay tribute to Elijah Lee for his inspiration, his strong spirit and for teaching us that we all have to take a stand to protect our children.”

Lee told council, “I thank everyone so much for the support every step of the way. I’m very proud to say I live in a city that has built strong children. I’m so excited to receive this resolution.”

Councilman Carl Ferebee, who also called Kalieb Harrison to come up for his oratory skills, said of Lee, “For someone so young, he’ll do great things. Maybe one day he’ll be our next president.”