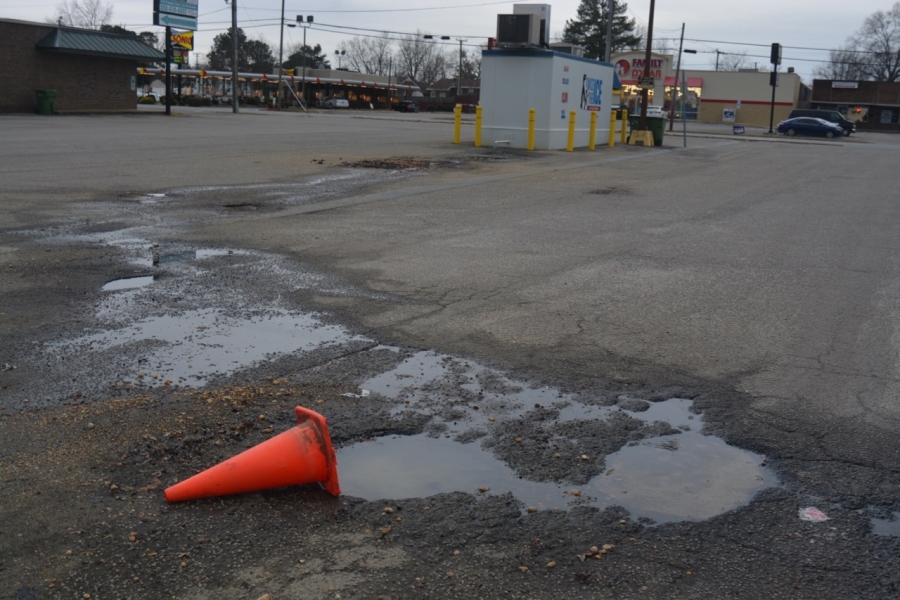 Business owners in the Forest Hills Shopping Center are closer to a major parking lot repair and repaving project now that work is expected to be completed on an underground 2-inch wastewater drainage line from a stand alone ice vending machine located there.

The ice house wastewater line will tie in to a private sewer line which connects to the Roanoke Rapids Sanitary District sewage system.

Jay Baker, owner of Forest Hills Laundry, said it has been a problem which has festered for several years, one which he says was hastened “by the city of Roanoke Rapids allowing it to be improperly installed.”

But the problems with the parking lot have not been all tied to the ice house.

The machine was installed through designs which allowed for a french drain system, said Roanoke Rapids Planning and Development Director Kelly Lasky.

Lasky said she began sending letters about the condition of the parking lot in 2012 and in December of 2016 the department began getting more specific complaints about the ice machine.

“In May of 2010, the ice house was installed through designs which allowed for a french drain system,” she said. “The ice house machine was completed and inspected for compliance in accordance with North Carolina Professional Engineer sealed drawings. What apparently happened after that was the french drain system failed, causing the system to overflow.”

The problem has caused a steady stream of water to flow from the machine.

The issue with the ice machine, compounded with years of neglect of the parking lot, potentially furthered the problems with asphalt conditions, Lasky said. “From my perspective that shopping center which was built in 60s and 70s was not constructed to include adequate stormwater drain systems compared to today’s standards. From what I have researched in the way this shopping center was developed, and the way which property was subdivided and developed, it was done more in a piecemeal approach than a comprehensive neighborhood shopping center.”

If Forest Hills Shopping Center were built today as is, “a stormwater management system would be installed that adequately captured the anticipated rainfall amounts to move water more efficiently. Repaving the parking lot should not have any impact on stormwater runoff because of the existing conditions. The contractor should ensure drainage from existing areas is graded appropriately.”

Baker said Forest Hills is one of the busiest shopping centers in the city. “We have a lot of good and longstanding business here and we’re glad to be able to get on with this project and get back to business.”

The parking lot has been the subject of a lawsuit when the county took it over for non-payment of taxes, said Linda Warren, president of the Forest Hills Shopping Center Property Owners Association, in a recent interview.

The association was formed after the court ruled it was the responsibility of the property owners in the shopping center to provide upkeep of the parking lot.

A formula was devised by the court for the 18 business in the shopping center to pay for the maintenance.

“Because it was in such bad shape, they wanted us to fix it,” said Baker. “The judge ruled we have the responsibility to maintain it.”

An easement agreement was filed on January 28, which stipulates the owner of the ice vending machine is required by the city of Roanoke Rapids to install the underground line. That easement is only for the installation, connection, use, repair and maintenance of the line, the document states.

With the easement granted and the work underway, the business owners in the shopping center are now waiting for its completion so the paving work can begin.

Warren, who owns West Coast Designs, said it will cost approximately $130,000 to repair and pave the lot “and bring it up to code.”

The project will also include proper striping, she said.

There has been noticeable loss of business in the shopping center, Baker said. “We’ve been losing business for years.”

Warren said the potholes and condition of the lot come up in daily conversations with customers.

Baker has delayed making improvements to his laundry until the parking is paved. “I’ve been waiting years to make a new investment in this place. I’m planning to put in $60,000 in new equipment.”
Baker said Friday the paving project will begin as soon as it’s warm enough. “Maybe I can get back some of the business I lost during the debacle. It’s just a sad situation. For two years I noticed a loss of business. The ice house destroyed an already bad parking lot. The ice house just accelerated it.”

Baker credits Councilman Wayne Smith and Mayor Emery Doughtie for pushing for a resolution to the matter.

Said Lasky: “We look forward to a resolution of the complaints and compliance with the zoning violations we have pursued since 2012. Compliance is our goal to ensure the safety of the public and the persons using the shopping center.”